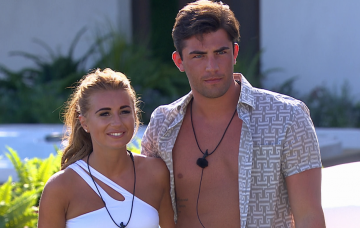 They’ve been the stalwart couple of the season, and Love Island’s Jack Fincham and Dani Dyer have some added support – from A-list star Margot Robbie!

The actress, who plays Queen Elizabeth I in the upcoming Mary Queen of Scots, has confessed her enthusiasm for the show, and insisted that Jack and Dani are her pick to win.

Speaking to the Daily Star Sunday, she claimed that she was dreading the end of the show, saying she had spent the summer devoted to it.

“We have dedicated our summer to watching those guys. We are going to miss them,” she said.

Margot went on to say that she hoped that many of the couples would be happy together outside the villa – but that Jack and Dani were the ones who would make it.

“Hopefully a lot of them stay couples in the real world and there is a happy ending for them all. But the winners have to be Jack and Dani.

“Jack and Dani have been together since day one and are the only couple who I can say I am totally sure will make it on the outside.”

The Australian actress – who received Oscar and BAFTA nominations for her starring role in I, Tonya – also mentioned the comparisons that have been made between her and Love Island contestant Megan Barton Hanson, saying she couldn’t see the similarities.

“The other night we were watching and I think it was Alex [George] who said that, and we all lost it!”

News of the star’s comments managed to make it in to the villa as part of a quiz, with a question revolving around “Megan’s lookalike” mentioning Alex by name.

In response to the revelation, Alex said “Margot Robbie knows who I am. Mind blown.

Do you agree with Margot – will Jack and Dani make in on the outside? Leave us a comment on our Facebook page @EntertainmentDailyFix and let us know what you think!