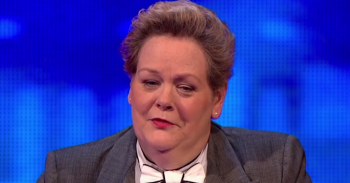 The tweet got 25,000 likes before Anne was ordered to remove it

Anne Hegerty says ITV “threatened to suspend” her over a tweet.

The Chase star claims the channel weren’t too happy with a message she posted on Twitter last month and despite the post garnering 25,000 likes, she was “ordered” to take the tweet down by the network.

Speaking on Lorraine, she said: “I’ve been known to get in trouble for doing that [answering back on Twitter].

“I tweeted a tweet last month, it got 25,000 likes, before ITV ordered me to take it down and threatened me with suspension.

“One is not actually trying to upset the source of one’s bread and butter.”

Anne didn’t comment on the specific tweet, but last month she slammed one Twitter user as a “sad [expletive]” after they had trolled her fellow former I’m A Celebrity… Get Me Out Of Here! co-star Emily Atack.

Emily had announced she was “thrilled” to be playing Debbie Harry in a new season of Sky Arts’ Urban Myths.

Anne then wrote: “What a sad [expletive] you are, Steve.”

The 60-year-old star recently admitted she is often inundated with comments asking if she is leaving The Chase when she talks about her “final Chase” on the show, but is in fact referring to the concluding segment of each episode.

In response to confusion surrounding fellow Chaser Paul Sinha making a similar comment on an episode, Anne – who has amassed 118,000 Twitter followers – tweeted: “This happens to me all the time.

“I say something about my Final Chase and Twitter gets hysterical and thinks I’m leaving.

“We have ALWAYS referred to the endgame as the Final Chase.”