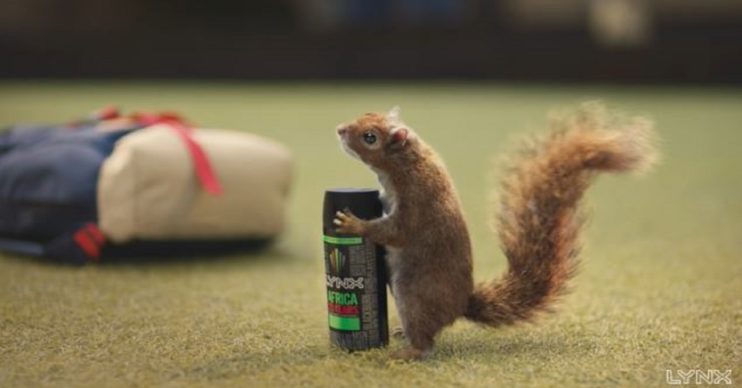 The ASA received 155 complaints about the ad

During Saturday’s (May 2) episode of BGT, the broadcaster aired an ad for Lynx Africa featuring a CGI squirrel humping a can of the bodyspray.

It was on screens around 15 minutes before the usual 9pm watershed.

And a number of viewers are reported to have taken issue with the advert. Dozens complained about it to the Advertising Standards Agency (ASA).

What did the ASA say?

A spokesperson for the body told Metro: “We [had] 155 complaints about the Lynx TV ad featuring a squirrel behaving amorously with a deodorant can.

“The general nature of the complaints is that the ad is offensive, is inappropriately scheduled and is unsuitable for children.

“No decision has been made on whether there are grounds for an investigation.”

Bemused viewers reacted to the advert on Twitter, shortly after seeing it in the BGT break.

One said: “@BGT @Unilever @lynxafrica_gift can I just check I saw a squirrel dry humping a can of Lynx Africa in the #bgt advert break… hilarious thank you @antanddec @itvstudios @TomClarke_ITV @MaryNightinga17 @julieetchitv.”

What on earth was that @lynx and squirrel advert?

Another wrote: “Did anyone else notice the squirrel at the end of the @lynx advert during @BGT… bizarre!!”

Someone else tweeted: “@BGT did we just see a very happy squirrel with a Lynx can???”

A fourth asked: “Errrrr?! What on earth was that @lynx and squirrel advert?! Two kids here @BGT.”

An ITV spokesperson said: “Any advertising that we have in place will always fall in line within the Ofcom Broadcasting Code, as well as regulations that have been set out by the Broadcast Committee on Advertising Practice (BCAP).”

And a spokesperson for Lynx said: “Although this advertising campaign complies with all broadcasting codes, it is never our intention to cause any offence. In future this version of the advertisement will only be broadcast after 9pm.”

@BGT @Unilever @lynxafrica_gift can I just check I saw a squirrel dry humping a can of Lynx Africa in the #bgt advert break. ..hilarious thank you @antanddec @itvstudios @TomClarke_ITV @MaryNightinga17 @julieetchitv

Did anyone else notice the squirrel at the end of the @lynx advert during @BGT…..bizarre!!

@BGT did we just see a very happy squirrel with a lynx can???

In the advert, a young man sees a young woman he fancies and tries to spray himself with Lynx Africa. But it’s knocked from his hand before he can do it.

When he tries to retrieve it, he finds himself in a bizarre alternate dimension. At one point, boxer Anthony Joshua is seen as a bobble head on a car dashboard.

The boy eventually gets the deodorant and walks away with the girl of his dreams. Right at the end, the squirrel is seen humping the can to squeaking sounds.

What do you think of this advert? Leave us a comment on our Facebook page @EntertainmentDailyFix and let us know.