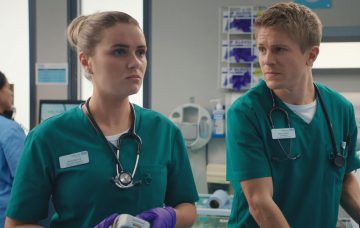 Consultant Ethan Hardy (played by George Rainsford) has been keeping a dark secret under wraps for months now (with the exception of confiding in his boss Connie Beauchamp), and no it’s not that he is suffering from Huntington’s disease.

In this Saturday’s episode he decides to confess all to his colleague and former love Alicia Munroe (Chelsea Halfpenny) about his role in the death of bad boy Scott Ellison.

For viewers who haven’t been glued to Casualty, Ethan let his brother Cal’s murderer Scott Ellison die in the ED when he could have tried harder to save him! And the guilt is still eating him up inside.

Alicia is keeping a dark secret of her own – her rape at the hands of junior doctor Eddie McAllister. Alicia uncovers Ethan’s relationship with Scott’s former girlfriend Leigh-Anne Carr (played by Cassie Bradley) when she returns to the Holby ED claiming newborn baby Keegan is ill in a ruse to see Ethan, who has since ended the relationship.

Realising Ethan isn’t interested in rekindling their romance, she threatens to make a complaint against him for sleeping with a patient.

But, it’s Alicia who is the one to come to Leigh-Anne’s aid and calm her down, saving Ethan’s job in the process.

Then later when Alicia discusses the incident with Ethan, she begins to build up the courage to confide in him about her terrifying rape ordeal.

She is stopped in her tracks, however, when he shockingly confesses that he was responsible for letting Scott die.

So how will Alicia cope after Ethan’s confession?

George told What’s on TV recently: “Alicia walks off in revulsion, I think he was hoping she’d console him.

“In a way, he doesn’t know what’s happened because he wasn’t expecting it. He tries to process why Alicia has walked away but doesn’t know it’s because of what’s going on with her. He misunderstands her reaction.”

Should Alicia forgive Ethan? Leave us a comment on our Facebook page @EntertainmentDailyFix and let us know what you think!