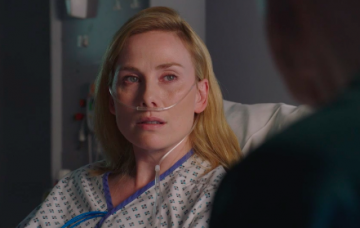 We'll be saying goodbye to a major character!

It’s been a tough year so far for Holby’s cardiothoracic surgeon Jac Naylor (played by Rosie Marcel); after being shot by gunman Fredrik Johansson, the unhinged son of Holby CEO Henrik Hanssen.

In tonight’s episode, Jac is ready to undergo a pioneering stem cell operation performed by her colleague Professor John Gaskell in a bid to be able to walk again.

Fletch (played by Alex Walkinshaw) has already warned the feisty surgeon against the op.

“Do you think a quick fix is worth risking your life for?” he asked her in last week’s episode.

“I don’t mean to be blunt, but what about Emma? If you die, she grows up without a mum.”

Jac replied: “The thing is, I’m not going to die.”

Rosie has already revealed that a main character is about to lose their life in the show, telling What’s on TV: “Jac’s surgery isn’t going to be straightforward. Well, nothing’s ever straightforward in Holby, is it?

“I can tell you this, though, someone’s going to die and someone will come very, very close to dying!”

If Jac does survive, will it be happy ever after for her and Fletch, her on-off sort-of-love-interest?

Rosie told the Daily Star: “A lot of shows pair people up and if you really think about it, Fletch deserves better than Jac.

“Jac is destined to be alone because she’s such a miserable cow.” Well there’s no denying the last bit!

Also in tonight’s episode, consultant Serena Campbell’s (Catherine Russell) priorities are tested when a medical emergency strikes too close to home,  and Bernie (Jemma Redgrave) begins to fear for their relationship. Will it last?

Who’s your favourite? Leave us a comment on our Facebook page @EntertainmentDailyFix and let us know what you think!