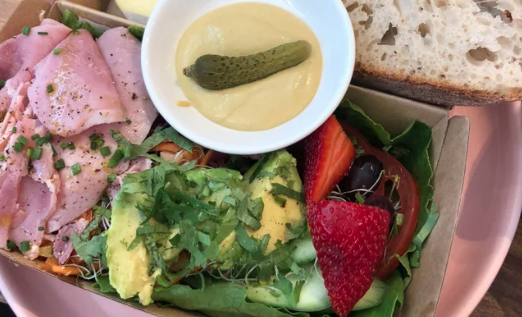 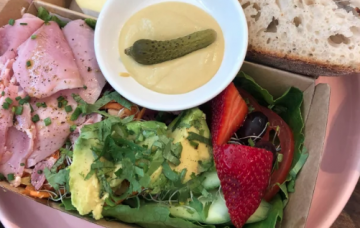 People on the internet are absolutely furious – what a shock, eh? – after the morsel seen above and below was served up in an Aussie restaurant.

It isn’t just the portion size causing such outrage, though.

After all, on first look it appears to be a perfectly fine, dinky little side salad. The kind of greenery that occupies only a tiny part of the plate and makes you feel a tiny bit virtuous as it breaks up gob-fulls of chips.

But that isn’t a salad. It isn’t even those bits of a burger/kebab that everyone leaves untouched, wilting ever more.

Take another look at it, a wider shot this time.

That, apparently, is a sandwich.

Now, we’ve heard of an open sandwich before – we’ve been to the kind of posh cafes where they serve that and still charge you money for preparing it. They let us in, we’ve lived the high life.

But we’ve also been to Tesco, bought all the basic, constituent elements of a sandwich and still not claimed a tub of Lurpak, a small brown Hovis and some Cheddar slices make up a sanger just because they’re in close proximity to each other as they leave the shop in a placcy bag.

This particular specimen, however, is what was served up to Reddit user MiloXF and their cousin down under in Sydney cafe.

Plenty of sandwich ingredients seem to be there – butter, bread, ham, salad greens and veg, a little pickle and even a few dabs of mustard.

But why were they presented in completely redundant cardboard boxes? The packaging was served on a plate!

Why did the mustard arrive in a small pot rather than on the snack?

And is that a strawberry we spy nestling in the salad leaves there?

Overall, was the chef a bit tired and unable to finish the job?

On top of these presentation issues, this alleged sarnie came with a price tag of seventeen Aussie dollars, which is about ten quid. For that amount, most people would hope for something a little more than a premature cob.

And most people commenting over on Reddit agree, slamming the offering as “stupid” among many other furious, profane assessments.

“It’s when you think you’ve ordered a meal, but the waiter actually delivers your shopping,” observed one user

“If I wanted to make a sandwich myself I would have stayed at home and done it,” added another.

A third remarked: “A sandwich is the name of a food items where ingredients are put between to slices of bread. The name implies that it should assembled.”

However, a few commenters did note that the original poster and their dining companion perhaps should have picked up on the unique sandwich approach when reading the cafe’s menu.

“Your cousin ordered a menu item called “Sandwich Box”. Box. Stop being outraged for nothing,” a person claiming to be familiar with the eating spot posted.

It is enough to have Breville turning over in his toaster…

What do you reckon to this alleged sarnie?