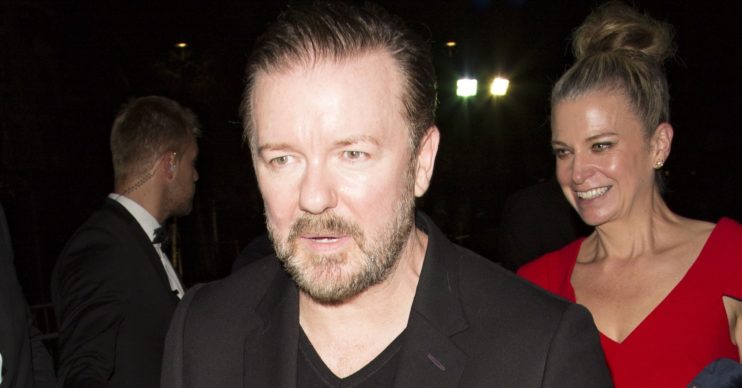 Is it a fallout?

Ricky Gervais has risked a feud with Victoria and David Beckham if his Twitter activity is anything to go by.

The comedian, known for his biting jibes against many celebs, reportedly ‘liked’ a tweet which was ripping into the Beckhams.

The tweet has now been deleted, but not before it was seen by thousands.

The Beckhams are estimated to be worth £335 million.

But they chose not to draw on that wealth to support staff in Victoria Beckham’s fashion company during the coronavirus pandemic.

Instead, the power couple reportedly opted to take advantage of the government’s scheme to keep staff on the payroll at a cost to the taxpayer.

‘I’m done with them now’

Angry at the news, one tweeter wrote: “The Beckhams, sorry I’m done with them now. Shame on them.”

And according to reports, Ricky ‘liked’ the tweet before it disappeared.

The Beckhams, sorry I’m done with them now.

If Ricky Gervais, 58, has had enough of the Beckhams, he wouldn’t be the only one.

Piers Morgan laid into the pair on Twitter. He slammed Victoria in particular for praising the NHS on Instagram while not doing her bit to help during the crisis.

He wrote: “Sorry, but this makes me puke.

Yesterday I had the humbling opportunity to speak to 2 NHS teams in different parts of the UK. I have posted parts of the conversation on IGTV. Please have a look and listen to what they are saying. They are so inspiring and we all need to do our part in staying home and helping these incredible workers and their colleagues on the frontline x VB

“If you care this much about the NHS, @victoriabeckham then why are you taking taxpayer money the NHS desperately needs.

“You DON’T need to furlough your staff and prop up your failing business.”

In the video on Instagram, Victoria says: “Our thanks goes to all the healthcare workers, all around the world, who are working so, so hard.

“Leaving their families, to go to work, to protect us and our children. Thank you from the bottom of our hearts.”

This week, Victoria celebrated her birthday.

But reportedly she told friends it was the “worst week” as she fended off criticism for the furlough decision.

Ent Daily has contacted reps for Ricky Gervais and the Beckhams for comment.