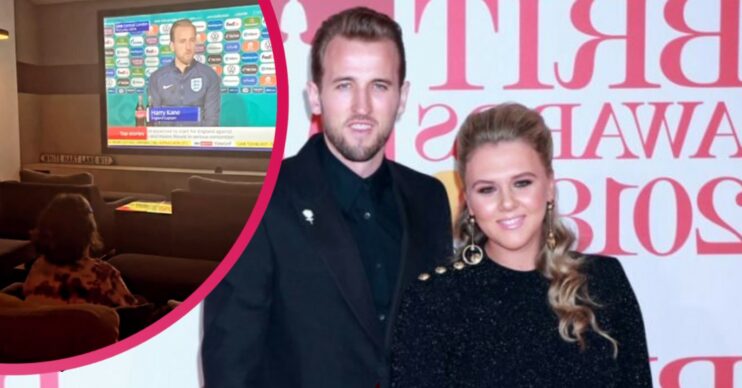 Who is Harry Kane married to? Footy star’s wife Kate shares rare picture of their kids

The wife of Euro 2020 star Harry Kane has shared a rare picture of their children.

Harry and his wife, Kate Kane, have been an item since they began dating when they were just teens.

The pair share three children together, Ivy, Vivienne and Louis.

On Tuesday (June 29), 27-year-old Kate took to Instagram to share a rare photo of her three adorable little ones.

Harry is the team captain of the England football team and is preparing to go head-to-head with Germany tonight (June 29). Kate is among the WAGs this year cheering on their husbands.

In support of their dad, Kate showed her three children wearing England footy kits with their dad’s number.

However, instead of their dad’s name above the number, it says “daddy”.

She captioned the adorable family moment: “We love you, Daddy…”.

Harry and Kate were childhood sweethearts at school, who just so happened to share a mutual love for football.

The footballer has had a very busy life both on and off the pitch over the last few years.

In January 2017, the couple welcomed their eldest child, Ivy. Their second daughter, Vivienne, then arrived a year and a half later in August.

And then, a mere six months ago and in the middle of Euros 2020 training, Louis was born on December 29.

Alongside a picture of his newborn, he wrote: “Our beautiful baby boy has arrived. 29/12/2020. Louis Harry Kane.

“I couldn’t be more proud of my wife @katekanex. A special way to finish the year. Happy New Year everyone.”

Kate shared the same picture on her own Instagram account and added: “Our little baby Louis has arrived. Happy new year everyone.”