Could Gemma Collins be entering the Love Island villa?

Could the boys handle The GC's candy?

Fans have called for ITV2 to invite TOWIE favourite Gemma Collins to join the Love Island villa, after being left unimpressed by the lack of ‘curvy girls’ in this year’s series.

The social media debate was sparked by Geordie Shore’s Holly Hagan, who tweeted: “I wonder if there will ever be anyone remotely curvy in @LoveIsland.”

The post received over 5000 retweets from fans, with supporters agreeing with Holly and suggesting that ‘The GC’ would be the perfect contestant to shake things up!

“All I want is for Gemma Collins to walk through those Love Island doors,” wished one fan.

Another agreed: “Can we just spice up Love Island this year and get Gemma Collins to go in?”

One fan also urged the show to promote ‘all shapes and sizes’.

“I think to promote the right vision, they really need to have girls in there of all shapes and sizes, we are all beautiful. Skinny isn’t all that. Let’s celebrate our differences,” they wrote.

Catching on to the call for her to join the cast, the Essex favourite, 37, who runs her own clothing boutique, took to Instagram stories to drop a major hint that she wanted IN!

After reposting a news story about the social media tweets urging her to join the dating show, the diva seemed to be in full holiday mode as she posted a picture of herself in a swimsuit.

Hot pink and emblazoned with the word ‘candy’ – Gemma looked good to go!

Fans also took to Gemma’s own Instagram page to share their views, with one follower even proposing to start a petition for Gemma to appear. 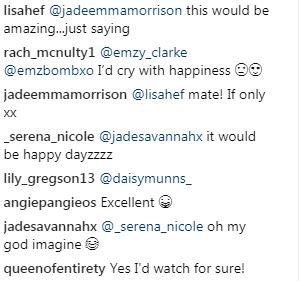 “This would be amazing,” agreed another fan, and another said they would ‘cry with happiness’.

One requirement, however, is that Gemma would need to be single, and she’s currently dating TOWIE co-star, James ‘Arg’ Argent.

Find out more: Which famous soap star would NEVER let her daughter appear on Love Island?

While presenting the award for Best TV Show to Love Island, Gemma fell through a trap door after miss-stepping, falling onto Marcel Somerville, Jamie Jewitt, and Amber Davies, who had to be checked over by paramedics.

“I just wish I hadn’t got so excited to give them an award and spun around a fell in a hole. I just want to apologise because I wiped them out,” Gemma said at the time.

So whichever way we approach this, Gemma could be entering the villa very soon #TheGC #WatchOutFlackers.

Would you love to see more curvy women in the Love Island Villa? Leave us a comment on our Facebook page @EntertainmentDailyFix and let us know what you think!