Is another twisted Tate about to follow Joseph back to Emmerdale?

Could she return to cause even more trouble?

After that amazing Emmerdale reveal in last night’s episode when Tom turned out to be Joseph Tate, fans are clamouring for the return of another member of the iconic soap family – the fabulously evil Kim.

Kim Tate was lady of the manor at Home Farm during the 90s, keeping the viewers enthralled with her antics from saucy affairs to leaving hubby Frank – Joseph’s grandad – to die at her feet before stepping over his body and heading off into the sunset.

And now, with Joseph back on the scene, Emmerdale fans are desperate for the catty soap matriarch to come home, too.

“I reckon we’ll be seeing Kim Tate back at Home Farm soon,” said one fan.

“Excited about the prospect of the Tates reclaiming their ancestral home at Home Farm,” wrote another. “All I want is for Claire King to come back as Kim Tate.”

Read more: Full reasons for Louise and Jamie’s divorce to be kept secret

“Hope this is paving way for a #KimTate comeback!” said another hopeful viewer. 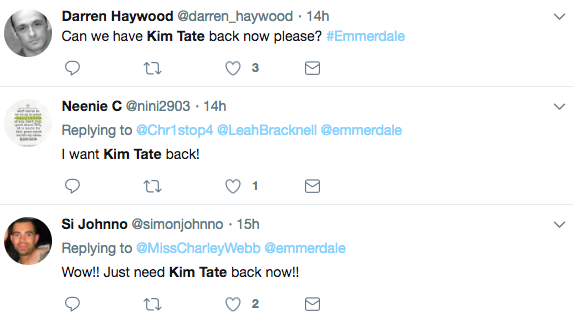 Lots of fans commented that Kim – who ruled the village during her time in the show – would soon keep her step-grandson Joseph in line.

“She of all people would keep Joseph Tate well in check before he destroys Emmerdale altogether,” one fan wrote. 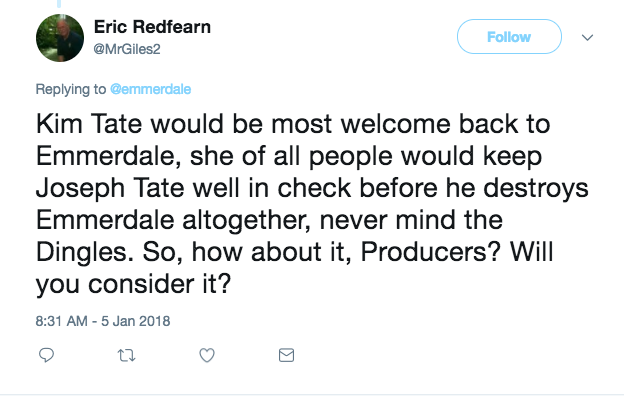 While another agreed: “Y’know who we need back to wipe the smug smile off Joseph Tate’s face…the Queen herself #KimTate.”

Kim also has a son – James – who would be about 22 now. She’s not been heard of in the village since Seth died back in 2005 when she sent flowers to the funeral.

Claire King, who played Kim and who was recently seen in Corrie, was tagged in lots of the viewers’ pleas but though she liked the comments, she has remained frustratingly quiet about whether she has any plans to return.

Though back in the summer she told Loose Women, that the door was still open.

“Never say never,” she said then.

But the rep didn’t comment on whether the show’s bosses wanted to bring her back.