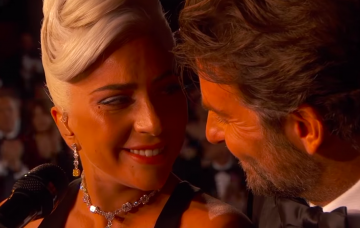 The news followed that sizzling performance at the Oscars

The speculation has been impossible to miss, and it looks like Bradley Cooper’s girlfriend has had enough.

Supermodel Irina Shayk has reportedly UNFOLLOWED ‘love rival’ Lady Gaga on social media after rumours raged about the chemistry between the A Star Is Born co-stars.

Eagle-eyed reporters at The Sun claimed Irina, 33, clicked the unfollow button before the awards show on Sunday, where her boyfriend of four years sang emotionally alongside Lady Gaga.

Russian Irina hugged Gaga, 32, after the song, but the newspaper interviewed body language expert Judi James, who said: “The hugs and embraces between Gaga and Irina look awkward and odd. Gaga placed both hands on Irina’s shoulders rather than on her arms in what might have looked like an act of affection.

“But she turned her head to the left as she kissed, just as Irina turned her face to her left in a parting of the cheeks.”

A source also told The Sun how Irina, who is mum to Bradley’s one-year-old daughter, is “sick of the constant stories about her ‘close’ relationship to Bradley.”

They continue: “It’s been a long publicity campaign and she’s ready for it to end. It’s undeniable that Gaga and Bradley have chemistry – they have a lot more in common that Irina and Bradley – but that’s why the movie worked.”

It was all anyone was talking about after Sunday’s Oscars, where the singer and Bradley, 44, performed Shallow from the movie, before staring at each other lovingly.

The internet piled in to suggest they were in love, despite Irina sitting in the audience, with one commenting: “The chemistry between them is undeniable. They will end up together soon is my humble opinion.” While one more more suggested: “I think she is in love with him, she is going to be hurt.”

Even presenter Piers Morgan tweeted a picture of them together, writing: “Are we 100% certain these two are just good friends… ?”

While Spice Girl Mel B suggested Gaga had broken the girl code, saying: “See, I felt so uncomfortable for Bradley’s girlfriend, oh my gosh.”

Others defended the pair, tweeting: “I think it’s called acting!” Another said: “Have you seen Bradley Cooper’s Mrs? I’m sure he is very satisfied with home life 😂🥰.”

A third tweeted: “They are close friends. Can a man and woman not be friends without people like you assuming they are more than friends?”

Well, this is a bit awkward. Maybe it was an unfollow-mistake?!

What do you think of this love triangle? Leave us a comment on our Facebook page @EntertainmentDailyFix and let us know what you think.