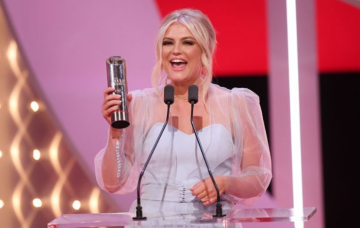 Coronation Street stars Lucy Fallon and Connor McIntyre were among the early winners at the British Soap Awards as they were recognised for their respective gripping performances.

Evil Pat Phelan (Connor) saw his murderous spree in Weatherfield come to a close on Friday night as he was killed off while Bethany Platt (Lucy) has endured a harrowing grooming storyline over the past 12 months.

Collecting her award, Lucy acknowledged the awareness her storyline had created while Connor joked the audience need not worry, Phelan was dead now.

Bethany was groomed by the evil Nathan Curtis who forced her and a number of other girls to have sex with his friends during a series of sordid episodes.

He was arrested after she reported his actions, but made her life even more difficult by using whatever means possible to prevent her from giving evidence in court.

Hollyoaks won the best single episode award for their episode addressing self harm, which was titled Three Mothers, Three Daughters, while the soap’s Malique Thompson-Dwyer and Theo Graham picked up the best on-screen partnership prize.

The actress, who is pregnant with the couple’s second child, wore a fitted, floor-length white dress as she joined other celebrities on the red carpet at the event being held in east London.

Doctors actress Elisabeth Dermot Walsh sported a Time’s Up badge as she walked the red carpet while Harvey Weinstein-accuser Lysette Anthony had a #MeToo slogan emblazoned on her wrist.

Dermot Walsh told the Press Association it was “very important” for her to support the movement and called Doctors a “truly feminist show”.

She said: “It’s a truly feminist show, the protagonists are very often females, the stories are driven by females, there are some very funny boys on the show too, but we are very lucky, we get to be centre of the story very often, which is not how it is across the world of drama.”