Strictly Come Dancing’s Frankie Bridge has posted a video of her two-year-old son Carter ‘working out’ with his dad, ex footballer Wayne Bridge.

Seen in what we presume is their gym at home, Carter copies his I’m A Celebrity star dad’s push-ups, and then picks up a little pair of red weights to follow Wayne’s moves – looking over at his daddy to gain some tips.

When you want to be just like Daddy and “do muscles” 💙 …. #father #son #love #family #myboys @waynebridge03

Frankie, 29, looking on and laughing, captioned the super-cute video, “When you want to be just like Daddy and ‘do muscles’ #father #son #love #family #myboys @wayne bridge03.”

Fans couldn’t help but comment on how cute Carter is, with one broody admirer adding, “I think my ovaries just exploded!”

“Oh Frank! This melts me,” wrote another, with another adding, “This is just so adorable.”

Others were also quick to point out just how clean Frankie and Wayne’s garage is. As you do.

“Your garage is so clean!” admired one follower, with one comment even asking, “Where’s your lawn mower from, hun?”

As well as joining his dad in the gym, Carter spent time tending to his new cress plant.

Frankie shared an Instagram Story in which she told fans: “Carter was very pleased with his cress growing skills. Now I got to try and keep it alive.” 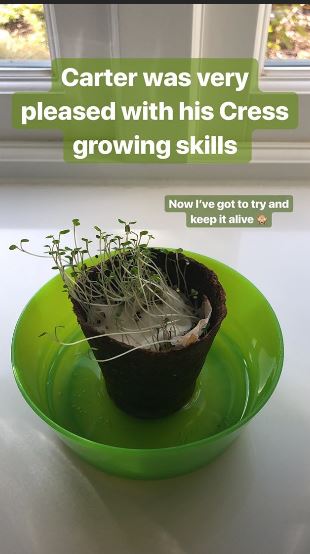 Frankie and Wayne, 37, also have another son, Parker, four, and the adorable tots are a permanent fixture on Frankie’s Instagram page.

In another post they can be seen break-dancing together, and one pic shows them lifting Wayne’s well-deserved boxing belt for Sport Relief.

On Mother’s Day, Frankie also posted a video Wayne had recorded of the boys telling her to have a safe flight.

She wrote, “I never knew how much love my heart could hold… until someone called me mummy.”

Wayne is also the ever-doting dad, and Frankie recently told Hello! magazine, “I married him for a reason!”

“He is such a kind and caring person. He often does little, thoughtful things,” she revealed.

The singer also described how her sons love cuddles and said she was happiest at home.

Former The Saturdays singer Frankie is also very honest about her journey through motherhood, and has opened up about crying every time her first son Parker cried, for almost a year-and-a-half after he was born.

She also revealed to the Loose Women panel last September that she often ‘avoided’ sex with husband Wayne, due to feeling anxious or exhausted.

“I will try, and I can be persuaded, but if I’ve sat there and made it obvious that’s not what I want… it’s never quick is it?” she laughed.

However, the couple do sometimes squeeze in a date night, and on Wednesday night they attended Frankie’s bandmate Una Foden’s rugby player husband Ben’s testimonial dinner in London – and Frankie looked absolutely gorgeous!

Read more: Coleen and Wayne Rooney enjoy a day at the races