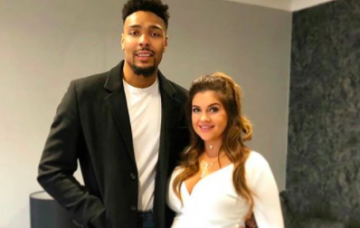 Jordan Banjo has celebrated impending fatherhood with a baby shower for his pregnant girlfriend, Naomi Courts.

Taking to Instagram, the I’m A Celebrity… Get Me Out of Here! star posted a cute snap with his partner of three years.

Jordan wrote: “Have the best day at your baby shower @naomiella21! You deserve it beautiful, you’re going to be the best mum when the time comes, I love you. #BabyShower #MumToBe.”

With his coat on, it looked like the Diversity dancer was leaving the female guests to it, and Naomi later posted several more pictures of her special day.

Beside a picture of white flowers, Naomi wrote: “Wow I don’t even know where to begin! I just wanted to thank you all but there are so many people!

“I have had the most amazing day and baby Banjo has been truly spoilt! Thank you all so much for coming and all the beautiful gifts! I cannot explain how much it means to us to have you all there for this special day!

“And of course a special thank you to @daniellebanjo42231 and @talisabanjo for putting this all together!

“It was incredible and beyond anything I could of ever imagined or even wished for!! I feel so overwhelmed, I can’t thank you guys enough for your hard work! And everyone that helped with the final touches before we arrived.”

She later added a montage shot from the day, captioning it: “Just a few photos from yesterday. Thank you to @daniellebanjo42231 and @talisabanjo for all your hard work and those that were also behind the scenes creating such a beautiful day!

“And of course thank you @stockbrookcountryclub for looking after us, such a beautiful venue with amazing staff! Xx.”

Fans of the pair seemed thrilled. One wrote: “OMG u 2 r so cute and so precious can’t wait for the new arrival congratulations to u both and good luck.”

Another added: “What a beautiful lil family right there, enjoy every precious moment.”

A third commented: “Congrats best thing ever being a parent xx.”

The happy couple, who met while Naomi was working as a hostess at Essex nightclub Sugar Hut, announced their baby news in January, confessing it was a “shock”.

She said: “I wanted to be sure so I went out and bought eight more tests. I sat with them laid out in front of me on the bathroom floor, staring at them in disbelief. We always said we wanted kids together, we just didn’t think it would happen this soon. We’re over the moon, though!”

Jordan added: “It took a bit of time for me to get excited about becoming a dad because it’s going to be a huge lifestyle change. Right now my greatest responsibility is making sure my phone is charged!”

And there was another shock when they found out they were having a boy.

Naomi admitted: “I started crying when they said it was a boy because I was completely convinced we were having a girl. I was delighted it was a boy but I felt very overwhelmed, as I’d mentally prepared myself for it to be a daughter.”

Are you excited about this pregnancy? Leave us a comment on our Facebook page @EntertainmentDailyFix and let us know what you think!