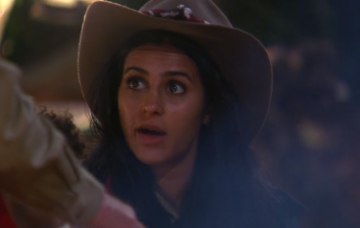 Sair Khan has left I’m A Celebrity viewers confused after appearing to eat emu meat even though she claims to be a vegan.

The Coronation Street actress, 30, entered the jungle on Sunday night and the star and her team won the first big challenge of the brand new series.

Sair is supposedly vegan but she ate emu??? I’m so confused #ImACeleb

I thought I read Sair was a vegan and she’s eating emu? #ImACeleb

A third added: “Sair Khan claiming to be a vegan so can’t do challenges that involve the animals… yet she’s just ate emu & said she’s already ate emu before?”

I’m so confused.. I could’ve sworn that Sair was a vegan?? yet she’s over here eating an Emu.. #ImACeleb pic.twitter.com/a48ZWOTWX7

Isn’t Sair supposed to be Vegan? Why she eating Emu?#ImACeleb pic.twitter.com/YvquvuE5Z8

One person said: “For anyone saying they thought Sair was vegan, literally nothing was confirmed. Until it’s confirmed I wouldn’t believe anything you read.”

For anyone saying they thought Sair was vegan, literally nothing was confirmed. Some Facebook page said they were not the official @imacelebrity , until it’s confirmed I wouldn’t believe anything you read :))) #ImACeleb⁠ ⁠ #ImACelebrity⁠ ⁠

Why are people so confused that Sair Khan said she’d eaten emu before? I doubt she came out the womb as a vegan. Everyone trying to call her out on it too as if she’s slipped up or something. Bizarre. #ImACeleb

Precisely!! People are so quick to judge but 1 it hasn’t been confirmed and 2 we only see what they want us to see‍♀️xx

I’m A Celebrity returned on Sunday night with Dec Donnelly and Holly Willoughby as hosts.

They have been joined by Hollyoaks actor Malique, ex EastEnders actress Rita Simons and The Inbetweeners’ Emily Atack.

Are you glad I’m A Celebrity is back? Leave us a comment on our Facebook page @EntertainmentDailyFix and let us know what you think!