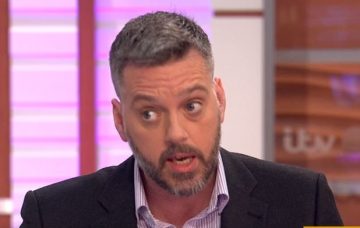 He said The 11 O'Clock Show had a "real nasty tone"

Former I’m A Celebrity… Get Me Out Of Here! star Iain Lee apologised to Richard Madeley on Monday’s episode of Good Morning Britain.

The comedian told Richard he wanted to say sorry over “mean” remarks he’d made about Richard’s family several years ago.

Iain, 44, revealed he’d said some unpleasant things on an old episode of The 11 O’Clock Show.

He spoke out after GMB co-host Susanna Reid pointed out: “We’ve just realised that this is the first time Iain Lee has met Richard Madeley… there’s some excitement in the studio.”

Richard told Iain: “But I feel like I know you…”

Iain then ‘fessed up: “Well, I feel I know you and we’ve had words before because I was very rude about you and your family on The 11 O’Clock Show years and years ago, really mean.”

Richard said: “You were, yeah, yeah, yeah. Don’t worry about it, comes with the territory.”

Iain continued: “I loved The 11 O’Clock Show, I was so proud of it but there was a real nasty tone about it, so I’m really sorry to you and your family.”

Richard, however, said it was all water under the bridge!

Richard said: “You have nothing to apologise for, it’s showbusiness… don’t worry about it. You were just doing your job.”

Susanna said it was a “historic moment in broadcasting” before Richard then joked: “Can you leave now please?”

Iain laughed: “This could be the second show I’ve walked off this month!”

That was in reference to his early departure from The Wright Stuff earlier this month, after a clash with host Matthew Wright, who had been quizzing him on personal matters.

Neither Iain nor Richard actually explained just what the remarks Iain made were… but as they’ve both brushed the incident under the rug, we guess it doesn’t really matter.

The 11 O’Clock Show was a satirical late night comedy series hosted by Iain and Daisy Donovan that aired on Channel 4 from 1998 until 2000.

Meanwhile, Richard is covering for Piers Morgan on Good Morning Britain while the show regular works on other projects.

The presenter, who is married to fellow presenter Judy Finnigan, last hosted the morning show back in October with Susanna, when Piers took a break to film Life Stories and his Serial Killers series in the USA.

Last week, Piers told viewers he would be “off for a while” but didn’t say for how long.

As the show ended, he declared: “I won’t be back for a long time, so you can all relax now.”

GMB is currently recorded at The London Studios and is in the process of renovations, so filming will move to a new location when Piers returns.

Have you ever apologised to someone or got an apology years after an event happened? Leave us a comment on our Facebook page @EntertainmentDailyFix and let us know!