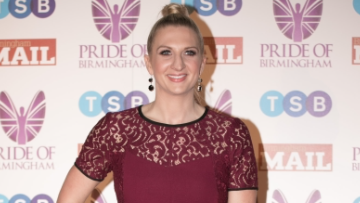 Wished him a happy birthday

They may not be together anymore but Rebecca Adlington has revealed her ex-husband Harry Needs remains a dear friend.

The former I’m A Celebrity star posted a sweet tribute to the father of her child, Summer, on Instagram to mark his 26th birthday.

Sending him her best wishes for his special day, Becky wrote: “Thank you for being an amazing dad, a great friend and always being there to give me a piggy back in life. Have a lovely day. Let’s hope Summer only has a few meltdowns today.”

The caption was beside a picture of them both swinging their two-year-old while on a dog walk.

Her comment touched many of her followers, with the picture gaining thousands of likes.

One told her: “You and Harry must be so proud at how you co-parent Summer. You are succeeding at something that many separated parents fail at. I’m sure Summer appreciates the way that both her parents work together to provide her with a stable loving childhood.”

Another said: “Summer is very lucky to have you both.”

Olympic swimmer Becky announced she was separating from Harry, also a former swimmer, in May 2016 after 18 months of marriage.

The couple had tied the knot in August 2014 and welcomed their daughter the following year.

Becky wrote in a statement when she announced their split: “It’s after much thought and sadness that we confirm our separation. It is on amicable terms and we still remain close friends.

“We move forward with respect for one another and our focus and commitment is on parenting our gorgeous daughter Summer.”

She once spoke about her relationship with Harry in an interview with the Radio Times, saying that she got together with Harry at a young age at the height of her fame, and they had to work out if they really had a future together.

“We were dating for a long time and Harry had to step back and say, ‘I have to figure out whether I like you or whether I like you because of everything you’ve achieved.’ He wanted to make sure he was with me for the right reasons,” she said.

Becky went back back to work after giving birth, working for the BBC’s commentary team and appearing on Channel 4’s The Jump following her retirement as a professional swimmer.

She will soon be helping the BBC cover the Commonwealth Games from Australia’s Gold Coast.

The star has plenty of knowledge of what it will take for Team GB to do well, as she won four Commonwealth medals during her swimming career, including two golds, as well as four Olympic medals.