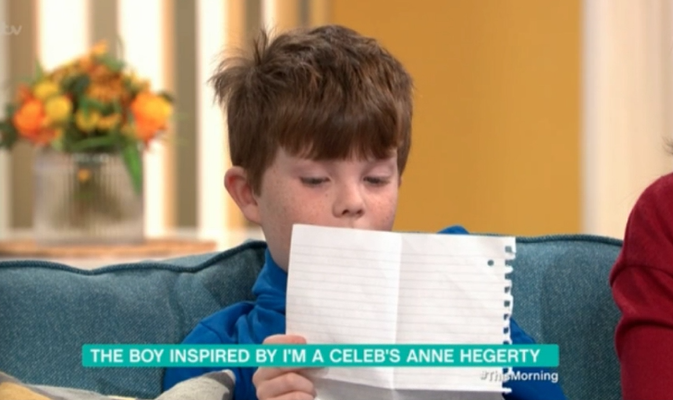 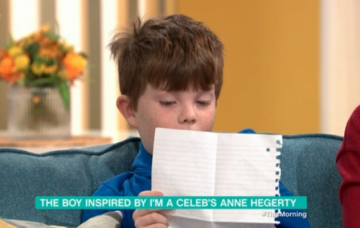 Anne was diagnosed with Asperger's in 2007

A schoolboy’s heartfelt letter to I’m A Celebrity contestant Anne Hegerty about their shared experience of autism has received thousands of shares online.

Joseph Hughes, 11, from Preston, was diagnosed with autism at the age of five and, according to his mother Kate Jarvis, he “has quite a few struggles, especially socially, but he’s a lovely little boy”.

Joseph appeared on Wednesday’s This Morning to read out his letter he wrote to Anne.

In the letter to Anne, who has spoken of her difficulty coping since entering the jungle this weekend, Joseph wrote: “I think you are very brave for going in the jungle, I couldn’t go there because there are too many bugs.”

“You are very clever,” he added, before saying: “Some people are mean to me because I am autistic but watching you makes me see that other people can have autism too and maybe I can have a cool job like you when I am older.”

He concluded his adorable letter, writing: “Good luck in the jungle, I hope you win.”

Joseph’s letter is one of many positive online responses after Anne discussed her autism on the programme.

The condition can affect a person’s social interactions, communication, interests and behaviour, according to the NHS.

Speaking about Joseph’s letter to Anne, his mum Kate said on This Morning: “It means a lot for him to see Anne in [the jungle]. He can see people with autism on the TV. He found it quite hard having autism.”

Viewers were moved by Joseph’s letter to Anne.

One person wrote on Twitter: “That lil dude Joseph reading his letter on #ThisMorning – be still my heart!”

That lil dude Joseph reading his letter on #ThisMorning – be still my heart! #AutismAwareness

Another wrote: “The little boy on this morning writing the letter to Anne is so cute! I love that Anne has inspired him to be open about his autism.”

The little boy on this morning writing the letter to Anne is so cute! I love that Anne has inspired him to be open about his autism ❤️ #thismorning

the little boy who wrote Anne the letter is on this morning😫❤️ what a little angel!!! #ThisMorning #ImACeleb

Please send the letter Joseph wrote to @anne_hegerty into the jungle, she needs to see the impact she is having. @ITV #ImACeleb #AnneHegerty @imacelebrity

Had me in tears! So beautiful xx I hope Anne does get to see this letter and meet Joseph xx

Kate also told the Press Association this week: “He sees his autism quite negatively sometimes, so was pleased to see someone with autism doing something like that for a job.”

On the show’s first day on Sunday, a clearly upset Anne said she was “really, really close to saying I can’t do this”,  and on Monday night’s programme she talked in more detail about the condition with former EastEnders actress Rita Simons.

Meanwhile, on Tuesday night’s show, Anne quit her first Bushtucker trial midway through as it all became too much for her.

However, after the second cage – in which cockroaches, meal worms and grass hoppers were poured over her head – Anne didn’t want to continue.

As she stepped outside the cage, hosts Holly Willoughby and Dec Donnelly asked the star if she was okay to continue the trial.

What did you think of Joseph’s letter to Anne? Leave us a comment on our Facebook page @EntertainmentDailyFix and let us know what you think.