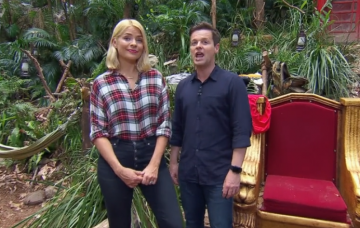 It’s always awkward when you get someone’s name wrong, but eagle-eyed viewers found it hilarious when they spotted that I’m A Celebrity had spelt one of its own star’s names the wrong way.

As the credits rolled on I’m A Celebrity Get Me Out Of Here – Coming Out on Wednesday night, fans spotted the show had spelled Holly Willoughby’s last name as “Willougby” – missing out the “h”.

While another wrote: “Did @ITV spell Holly’s name incorrectly the whole way through or just the round up show?”

Did @ITV spell Holly’s name incorrectly the whole way through, or just the round up show? #hollywillougby #HollyWilloughby #imaceleb

Another said: “@hollywills @ITV shame they spelt your name wrong at the end of the I’m a celebrity tv programme tonight!! @imacelebrity.”

@hollywills @ITV shame they spelt your name wrong at the end of the I’m a celebrity tv programme tonight!! @imacelebrity

Despite the bungle, the 37-year-old presenter has proved a huge hit with viewers and even threw herself into jungle life by taking part in the celebrity cyclone challenge on I’m A Celebrity: Extra Camp.

However it was back to luxury as Holly headed home from Australia reportedly treating herself to a £19,000 plane ticket flying home in a “penthouse in the sky”.

Read more: Nick Knowles responds after being accused of fibbing in the I’m A Celebrity jungle

Holly and her three children – Harry, nine, Belle, seven, and four-year-old Chester – apparently spent the 25-hour flight back in a three-room chamber that comes with a private butler and chef, not to mention her own bathroom, shower and a separate living room known as The Residence

A source told the Daily Mail: “This was Holly’s present to herself. She is thrilled that the show has been such a success and she’s had such great fun with Dec. She has loved presenting the show.”

However, the return trip wasn’t as luxurious for poor Extra Camp presenter Scarlett Moffatt as she revealed her luggage was lost.

Taking to Instagram alongside a picture of her with Joel Dommett and Emily Atack, she wrote: “How to make a 21 hour flight go a bit quicker.

“These two funny sods, Buck’s Fizz & @emilyatackofficial family, my luggage might not have made the flight but at least I have #jetlag #isreal.”