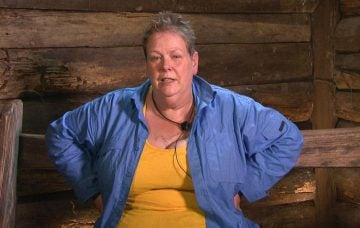 Producers are worried the Chase star will walk out

It’s been an emotional start to the new series of I’m A Celebrity … Get Me Out Of Here! and producers are said to be very worried about one particular contestant.

A new report claims bosses are concerned Anne Hegerty, who has Asperger syndrome, will leave the show after she broke down in tears on the first day, admitting she feels “overwhelmed.”

According to The Sun, bosses are “closely monitoring” Anne to ensure she’s doing okay.

The 60-year-old Chase star was allowed to skip the first trial but was still emotional as she struggled with the difficult conditions of the Australian jungle.

The publication also spoke to Anne’s manager David Hahn, who confirmed: “She’s in very good hands there. When she said she was doing the show, I asked, ‘Are you sure?’. But she wanted to inspire others with autism.

“Anne’s lovely with a great sense of humour. If she can get through the first week, she’ll go the whole way.”

A representative for I’m A Celebrity told ED!: “We closely monitor all our contestants.”

It follows Anne’s emotional display on the first episode, when her team lost the lake race. It meant they were forced to set up camp in Snake Rock while the other celebrities enjoyed the more luxurious camp Croc Creek.

If anything can get Anne through Jungle life, it's a team of supportive of Campmates! #ImACeleb pic.twitter.com/1Iymw9Hk5E

X Factor star Fleur added: “I feel like we all have to be there for her and the minute that we all rallied around her, she just felt so much better.”

Meanwhile, the show enjoyed its most-watched launch since 2013.

We’re rooting for you, Anne. You’ll be amazing in tonight’s trial.

Do you think Anne will stay? Leave us a comment on our Facebook page @EntertainmentDailyFix and let us know what you think.