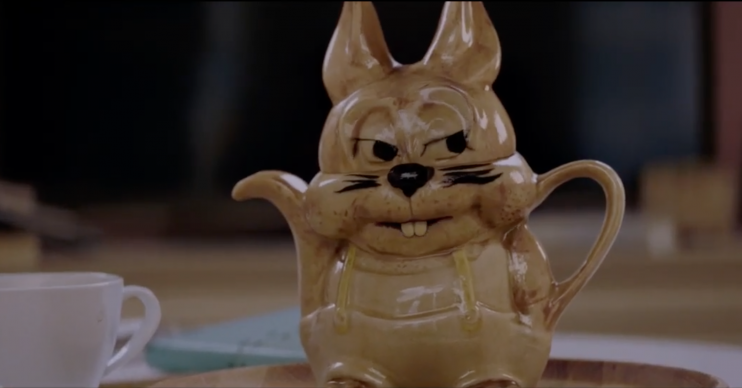 Ikea has released its first-ever Christmas ad, entitled Silence The Critics, and fans are calling it “iconic”.

The advert aims to encourage people to defy “home shame” when hosting guests this Christmas.

And it’s backed by an original rap – sung by grime star D Double E – that’s performed in the ad by a singing rabbit teapot who comes to life.

And, in a surprise piece of news, Ikea seems to have beaten John Lewis to become the nation’s favourite Christmas ad.

Read more: The Queen’s former press secretary slams The Crown for “suggesting she had an affair”

Many people have said they prefer it to the John Lewis Christmas ad, which was released today and features Excitable Edgar the dragon.

The Ikea advert sets the scene with a family of three living in a small flat.

Read more: M&S shoppers scramble to get their hands on the store’s Clementine Snow Globe Gin

The woman’s phone pings and it’s a message from her friend, confirming that they’re still on for dinner at her home tonight. Racked with home shame, she hesitates before replying, looking around at the state of the flat.

Suddenly, a whole host of inanimate ornaments and objects come to life as the house is ridiculed by the rapping rabbit and his pals.

The Ikea Christmas ad blows the John Lewis ad out of the water.

The couple and their little girl then decide to take action to silence the critics once and for all by sprucing up their humble abode with some Ikea furnishings.

At IKEA, we believe every home is worthy of a get together. This party season, let’s show home shame the door and Silence The Critics, once and for all.#WonderfulEveryday

For ideas, inspiration and products to get your home party season ready, visit https://t.co/SwcNGwExQN pic.twitter.com/Tq0KRL1uQ5

One fan said: “I love Edgar the Dragon but Ikea is definitely my favourite Christmas ad so far!”

Having just watched the #johnlewischristmasadvert gotta say #ikea wins hands down this is the ad that wins Christmas https://t.co/MhDZQQkspv

The Ikea Christmas ad blows the John Lewis ad out of the water🤷‍♂️#blukubluku pic.twitter.com/DBoldShRuZ

Others heaped praise on the original rap – Fresh N Clean (Silence The Critics) – that backs the song.

The tune in the Ikea Christmas ad is an absolute banger💥

The @IKEA Christmas ad with @DDoubleE7 is 💣🤯😂

What’s your favourite Christmas ad? Tell us on our Facebook page @EntertainmentDailyFix.