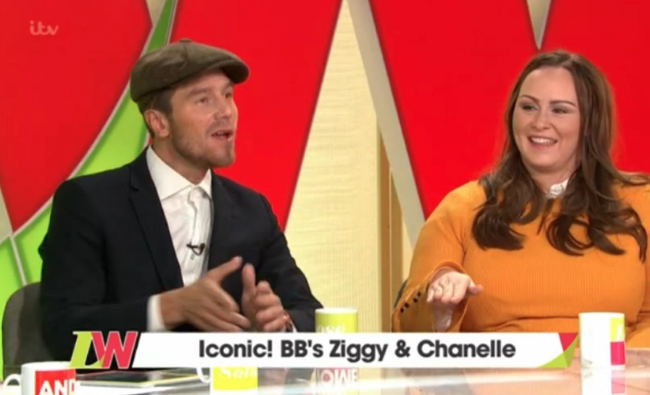 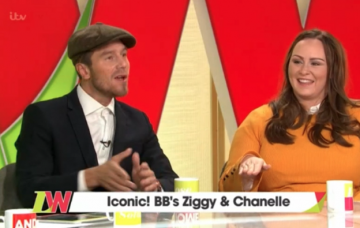 Viewers got a dose of nostalgia

Big Brother stars Chanelle Hayes and Ziggy Lichman reunited on Loose Women 11 years after their stint on the reality show.

The pair were the talk of the eighth series of Big Brother in 2007 when they fell in love in front of viewers’ eyes and had a string of epic rows inside the house.

They were even dubbed ‘the Posh and Becks of Big Brother’, however, split six months after leaving the show to focus on their careers.

Reuniting on the daytime show on Wednesday, Chanelle and Ziggy revealed they had seen each other “a couple of times” and stay in touch “occasionally” following their stint over a decade ago.

Speaking about their first time reuniting after the show, Chanelle admitted: “The first time was #awkward,” to which Ziggy added: “Very awkward.

“But since then, it’s plateaued out and we have our own lives.”

When asked if she regrets her time in the house, Chanelle – who was 19 when she did Big Brother – said: “No I don’t regret anything because I really love my life how it is now and if I wouldn’t have made those choices I wouldn’t be here.”

‘I still love her to bits’ Awwwww!
How lovely to see Big Brother’s @ziggylichman & @chanellejhayes reunited after all these years… pic.twitter.com/6UD7fnrAkA

Ziggy added: “I feel the same. I believe it gave us an opportunity in life and we’re both extremely grateful. Seeing Chanelle today, it’s crazy.”

When asked if they felt any pressure with their relationship being on-screen for millions of people to watch, Chanelle admitted: “We didn’t even know if we were on or off.

“We had so many people in our ear telling us so many different things – pushing us together, plotting us against each other.”

Ziggy added: “True. I have no doubt that we were in love. But we felt it was better at the time.”

Revealing what she’s learned since her break-up with Ziggy, Chanelle said: “Just listen to myself more. So many people saying different things to us, we didn’t know what was true and what wasn’t.”

‘I have no doubt we were in love’ – @ziggylichman on his relationship with @chanellejhayes during Big Brother 10 years ago. 💚 pic.twitter.com/RSDDJTWcE8

“But I would have still been a fish out of water in London as I’m from Wakefield. So unless [Ziggy] had moved up to Yorkshire then no I can’t ever see that working out.”

Ziggy admitted he still loves Chanelle “to bits” as they hugged each other.

Did you enjoy seeing Ziggy and Chanelle reunited? Leave us a comment on our Facebook page @EntertainmentDailyFix and let us know what you think!