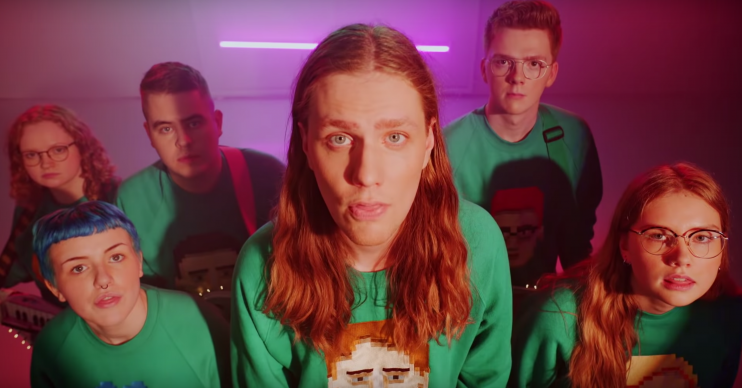 Iceland’s entry for the Eurovision Song Contest has become the favourite with the bookies to win the competition.

Think About Things by singer Daði Freyr Pétursson and his band Gagnamagnið has become a hit on social media – and it looks set to be a success with TV viewers, too.

Film star Russell Crowe is among the legions of fans on Twitter that have been won over by the catchy tune.

One fan raved: “If Iceland doesn’t win Eurovision with this, we riot.”

And the track’s music video has also performed impressively on YouTube, being viewed over one million times in two weeks.

Read more: Piers Morgan slams Susanna Reid for not standing up for him in ‘row’ with GMB co-star

It features the act performing the song in the living room of a bewildered family.

The band all wear green jumpers with pixellated faces on the front and cut some stiff shapes.

The song is about my little girl who was born in April of last year.

Now the act – the band’s name translates as “the amount of data” – has been backed by those pricing Eurovision’s entries to go all the way.

The majority of bookies appearing on oddschecker.com have Iceland romping away with the win.

Paddy Power have Iceland as the 7/2 favourite, with Lithuania (5/1) and Russia (7/1)  trailing just behind.

But some other bookies are slightly more cautious, having Daði Freyr as the joint favourite along with Lithuania’s entry.

Other countries that are also rated highly include Bulgaria, Romania, Italy and Sweden.

However, despite the bookies’ enthusiasm, there are still two months to go until Eurovision in Rotterdam.

Daði & Gagnamagnið’s progression to Eurovision was confirmed last week after they won the national Söngvakeppnin competition.

The dance track, written by frontman Daði, features lyrics about his newborn baby.

He told ESCBubble: “The song is about my little girl who was born in April of last year.

“I am talking about the feeling you get in the first few days and weeks where you know that you love this person with all your heart even though you don’t really get that much interaction.

“In the start, she doesn’t do so much, so I am very excited to know what she thinks about all kinds of things.”

The 2020 Eurovision Song Contest grand final will take place at the Ahoy Rotterdam Arena on Saturday May 16.

It will be broadcast live on BBC One.