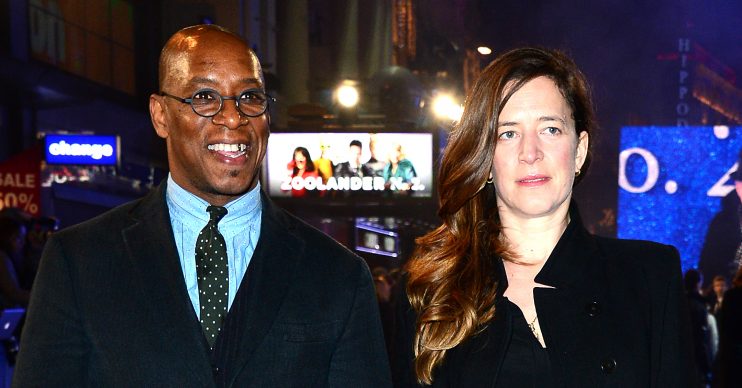 Former footballer is one of the favourites to be eliminated first…

Ian Wright’s wife Nancy Hallam has landed in Australia ahead of the first campmate leaving the I’m A Celebrity jungle.

She was one of the first of the celebrities’ family members to arrive down under.

Nancy smiled as she pushed her luggage – including a Louis Vuitton handbag – through Brisbane airport.

When he started out on the show, bookies said that Ian was their favourite to win.

However, viewers haven’t been best pleased with his jungle antics over the past few days and he is currently one of the favourites to be eliminated first.

Adele Roberts and Andrew Maxwell are currently joint favourites to leave first – with Ladbrokes offering odds of 7/4 for the two of them. Ian follows with odds of 9/1.

Ian has been accused of bullying Andrew and enraged viewers when he ate goods smuggled back into camp by Caitlyn Jenner.

Even reigning King Of The Jungle Harry Redknapp has commented on his “short fuse”.

So it appears Nancy could be reunited with her husband sooner than she may have previously thought.

Ahead of his jungle stint, Ian revealed: “I am going to miss my family. I speak to my missus every day and it’s going to be a test.”

The couple have two daughters, while Ian has six other kids from previous relationships.

Also arriving in Australia was Jacqueline Jossa’s husband Dan Osborne and their daughters Mia and Ella.

I am going to miss my family. I speak to my missus every day and it’s going to be a test.

The families will hole up at the plush Palazzo Versace hotel and head into camp each night once the evictions start to potentially greet their loved ones.

Fans have said that Jane McDonald should fly out to greet her superfan Adele Roberts. However, the cruise ship singer is yet to appear in Australia.