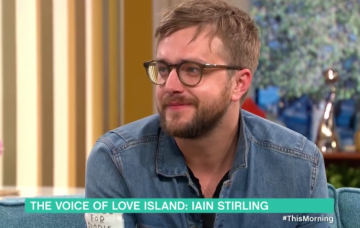 He's scared of her dad!

Love Island narrator Iain Stirling has vowed not to make fun of Danny Dyer’s daughter, Dani, when she appears on the new series.

Speaking on today’s This Morning about the show’s much-anticipated return, the Scottish comedian told Eamonn Holmes and Ruth Langsford he dares not crack jokes for fear of offending the EastEnders actor.

Attempting a Cockney accent to do an impression of Dani’s 40-year-old father, Iain said: “Alright, you mugs? Don’t you make fun of my daughter.”

He then added: “I am worried for my life. I am not going to do any jokes about Dani Dyer – Dani with an I.”

Iain did make a little jibe about her name, though!

“Danny Dyer calling his daughter Dani Dyer is the most Danny Dyer thing I have ever heard in my entire life,” he joked.

The topic was raised after Eamonn said: “Danny Dyer’s daughter is going in there and I reckon that is going to give you a goldmine of puns, jokes and impressions.”

But Iain promised to be careful about what he says about the 22-year-old because of her famous father.

Iain, 30, who is dating Laura Whitmore, said he flies out to Majorca at the weekend ahead of the new series returning to ITV2 on Monday night.

Explaining how his role works, he said: “I watch the footage that is likely to air like a viewer would, but in the afternoon, and then start writing jokes.

“Some of them are things you’ve got to say like ‘they are going over to the swimming pool’.

“If we spot something funny we ask the editors to give us some extra time.”

Despite poking fun at the contestants, Iain said he still ends up being friends with some of them – and he’s even been invited to one couple’s big day!

“Alex and Olivia from series two are getting married and I am going to their wedding,” he revealed.

While Iain narrates the new series, Caroline Flack will once again preside over the matchmaking at the luxury Love Island villa.

The show will run for eight weeks and producers hope it will be as successful as last year’s series, which made stars of Kem Cetinay, Chris Hughes and Olivia Attwood.

Dani already has a claim to fame as the daughter of actor Danny. Earlier this year, she was set to appear in another ITV show – Survival Of The Fittest – but had to pull out early due to injury.

She said she’s looking for love after being single for two years – but her new beau will have to be cool about her famous parent.

“He told the waitress again when we walked out. That’s when he saw the other side to me. And I unfollowed him on Instagram.”