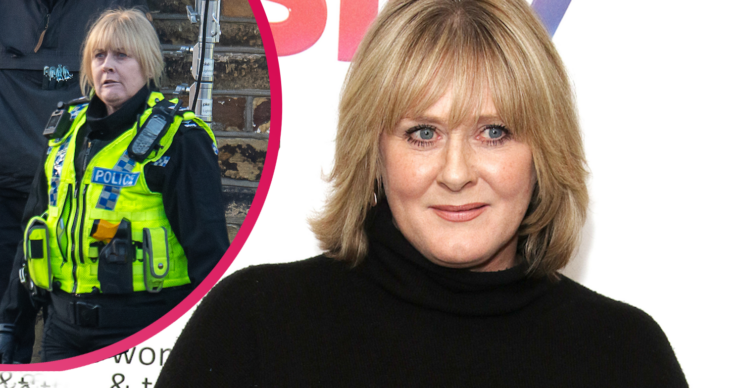 How old is Sarah Lancashire and who is she married to?

Literally everything to know about the Happy Valley legend

Sarah Lancashire is one of the UK’s best loved actresses.

She found fame as ditzy barmaid Raquel in Coronation Street but is now known for roles in dramas.

Sarah will return to screens in the third and final series of Sally Wainwright’s Happy Valley later in 2022.

Who is Sarah Lancashire?

Sarah Lancashire is a British actress best known for her roles in TV shows such as Happy Valley, Last Tango in Halifax and ITV soap Corrie.

She has won two BAFTAs and was awarded an OBE in 2017.

How old is Sarah Lancashire?

Sarah was born in Oldham, Lancashire on October, 1964.

How tall is Sarah Lancashire?

According to multiple biography websites, Sarah is about 5 ft 7 inches tall.

Or 1.73 metres, if you prefer the metric system.

Who is Sarah Lancashire married to?

Sarah has been married to TV producer, Peter Salmon, since 2001.

He’s currently CCO of TV production company Endemol Shine. Prior to this he was Director of BBC Studios.

Sarah and Peter have a son called Joseph.

The couple are notoriously private, with Sarah saying: “We are not a public couple and I don’t even like talking about my relationship with Peter.

“I guard it because it is very precious. It is not a piece of drama. It is real life, my normal life. And I value my normality.”

She was previously married to Gary Hargreaves and has two sons, Thomas and Matthew, with him.

In an interview with The Mirror in 2001, Sarah said: “I got married only because I was pregnant. Simple as that.

“I am a very traditional girl and was horrified at the thought of having a child out of wedlock. I didn’t want a child of mine to be different or have fingers pointed at them.

“My marriage lasted for 10 years, which was 10 years longer than it should have done. It was tough.

“But leaving my husband was really lovely. It was my renaissance. A very cleansing experience.”

Where does Sarah Lancashire live?

Sarah lives in Oldham with her husband.

What has Sarah Lancashire been in?

After leaving Corrie, she played district nurse Ruth Goddard in ITV’s Where The Heart Is.

She then moved to the BBC to play Yvonne in Clocking Off.

In 2000, she became the first female actor to be offered a ‘golden handcuffs’ deal with ITV. The deal was worth a reported £1.3 million and made her the highest-paid British actress.

In 2012, Sarah starred in the first series of Last Tango in Halifax alongside Nicola Walker and Anne Reid.

Her character, Caroline, was a married school headteacher, who fell in love with another female teacher. She won a BAFTA for the role in 2014.

She played Margaret New in the 2021 movie Everybody’s Talking About Jamie, based on the musical of the same name.

Who did Sarah Lancashire play in Coronation Street and when did she leave?

Raquel worked as a barmaid in the Rovers Return and was one of the soap’s most popular characters of all time.

Her relationship with nerdy Curly Watts won the hearts of viewers and the mismatched couple tied the knot.

Sadly, the marriage didn’t last, as Sarah quit the cobbles in 1996. Her final scenes drew in 20 million viewers.

According to reports at the time, she was struggling with the heavy workload and also wanted to explore other roles.

Sarah later confessed to suffering from depression during her time on the cobbles and had a breakdown, although she didn’t tell anyone about it.

As well as her TV roles, Sarah has starred in four musicals, Little Shop of Horrors, Blood Brothers, Guys and Dolls and Betty Blue Eyes.

In 2021 she starred as Margaret New in the film version of Everybody’s Talking About Jamie. She sang the song He’s My Boy for the role.

The pair had known each other for over 30 years when the first series of Happy Valley was being made, but they’re not related in real life.

How old is Sarah Lancashire in Happy Valley?

The show will return later this year and Catherine will be around 55.

There aren’t many details about the third series but it has been revealed that Catherine’s grandson – who was eight in the first series – is now a teenager.

Who did she play in Lark Rise to Candleford?

Sarah’s character in Lark Rise to Candleford was the drama’s narrator.

She was the voice of the adult Laura Timmins looking back at her life as a young girl.

Laura was played by Olivia Hallinan and the series also starred Julia Sawalha.