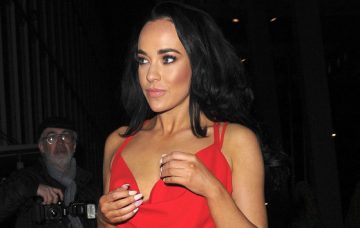 She spoke to the new issue of OK! Magazine

Hollyoaks’ Stephanie Davis has said she’d be “dead” if it wasn’t for son Caben-Albi.

The actress, who plays Sinead O’Connor in the Channel 4 soap, told OK! Magazine she felt “so suicidal” when she hit rock bottom following her split from Caben’s father, Jeremy McConnell.

But it was 21-month-old Caben that gave her the incentive to survive.

Posing alongside Caben in a new photoshoot, Stephanie said: “Although I look after him, he’s looked after me more than he knows. If it wasn’t for him I would have been dead and buried a long time ago. I was so suicidal, but he kept me going.

“He’s my little angel and I’ll be honest with him about everything. I’m proud of my journey and I’m glad that I’m an addict because the programme makes you a better person. I can say I’m a good person now.”

She told the magazine she has an “addictive personality” and was also diagnosed with depression, post-natal depression and post-traumatic stress disorder following a difficult time.

Her rocky on-off romance with Jeremy, which began in the Celebrity Big Brother house in 2016, was widely documented, making daily headlines until they called it off for good last year.

When asked for her thoughts on Jeremy now, she said: “I don’t feel anything. I used to, but now I don’t. A few months ago I had a turning point – I made peace with everything that’s happened in my life. I’m looking forward now and I’’m focusing on being the best mum.”

Meanwhile, Stephanie took to Instagram to reveal she can’t believe her son will celebrate his second birthday in January.

The proud mum told fans: “I’m so proud of my beautiful boy and the journey we have been on together as a two.

“I’m super proud of him! He’s the most special little boy, so CLEVER, so loving and caring and SO funny!!! He’s such a little character! Being a completely single parent, I was worried I wouldn’t be enough for him playing mum & dad… but how wrong could I have been… we have the most special bond!

“No money in the world could ever buy this feeling or special relationship we have as a two. I’m so so lucky and blessed to have the bond that we do and to watch him grow every single day into the amazing little boy. Although I’m his world and he depends on me for everything, he doesn’t realise how much he’s helped me and brightened my entire life!!

“I’m so RICH with love and happiness!!!! Where has the time gone! 2 years!  He’s Growing so fast! Love you my beautiful boy.”

Stephanie is returning to Hollyoaks three years after leaving the soap.

Are you happy Stephanie has returned to Hollyoaks? Leave us a comment on our Facebook page @EntertainmentDailyFix and let us know what you think!