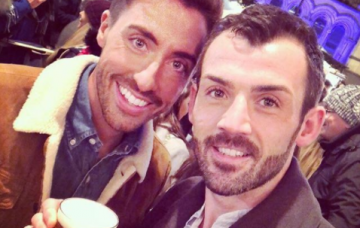 Hollyoaks actor Ross Adams has married his long-term partner Phil Crusham at an emotional ceremony surrounded by their friends and family.

Ross, who plays Scott Drinkwell, told OK! magazine there “wasn’t a dry eye in the house” after the pair said their vows.

The happy couple walked up the aisle together to Elbow’s One Day Like This.

“We started walking and Phil was so nervous, he literally galloped down the aisle! I was like, slow down! It was hilarious,” Ross recalled.

He was delighted his co-star Rachel Adededji, a former X Factor finalist, agreed to sing on their big day, performing What About Love along with one of his best friends as they signed the marriage register.

Ahead of the wedding day, Ross predicted to his Twitter followers that hankies would be needed during the speeches.

“Finally finished my wedding speech. Can’t get through it without crying hysterically. God help me on Saturday,” he wrote.

On the day, he then tweeted his excitement with a number of emojis writing: “It’s our wedding day!!!”

His friends and family rushed to congratulate him. Among the well-wishes was actress Claire King who said, “Hope you’re both having a fab day Hun.”

Ross and Phil became engaged in New York in 2016.

Sharing the news with his Instagram followers at the time, with an image of their Tiffany engagement rings, the actor wrote: “New York was amazing. Oh and this happened…”

The newlyweds have now jetted off on their honeymoon to Miami.

Ross shared an image of them having a drink at the airport before they flew, and then later shared an idyllic snap showing them enjoying champagne by the sea.

“#Honeymoon #miami. Having the best time ever at @wsouthbeach,” he wrote.

On their return, Ross said they won’t be starting a family just yet as they want to enjoy being a married couple first.

“We want to really enjoy that first year or so of married life and have another holiday before we start thinking about starting a family,” he said.