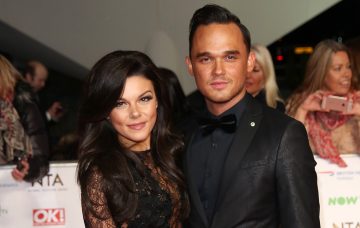 The couple got engaged earlier this year

The couple announced their engagement last month after singer Gareth popped the question at the start of the year during a trip to New York City at a friend’s high rise apartment.

The Coronation Street actress says Kelly – who is good friends with the loved-up pair – has agreed to get ordained so she can play a special part in their upcoming nuptials.

Speaking to the new issue of OK! magazine, Faye said: “We asked her if she would get ordained and marry us, and she said yes!”

Gareth popped the question at the start of the year, presenting the soap star with a four-carat diamond ring.

Faye – who plays Kate Connor in Corrie – admits it was a “perfect” proposal and she is looking forward to getting married and spending the rest of her life with Gareth, 34.

The 29-year-old actress said: “We were both crying the whole way through. Once it was finished, Gareth got down on one knee and said, ‘Will you spend the rest of your life with me?’ And of course I said yes straight away.

“It’s every girl’s dream to find the perfect man for her and then have the perfect engagement, so I feel very lucky. To have such a beautiful ring and to share the most brilliant life with my best friend is everything I’ve ever wanted.

Faye said Gareth could have put “any ring” on her finger and she would have said yes.

Gareth and Faye’s engagement comes after a brief split last September, but after a few weeks apart they reconciled.

The singer has admitted the brief break-up was caused by work pressures for both of them.

He said there was “a lot of strain” on their relationship and they decided they needed “some breathing space”.

It came after The Sun reported that the couple had become engaged.

An insider told the publication: “Faye and Gareth are over the moon.