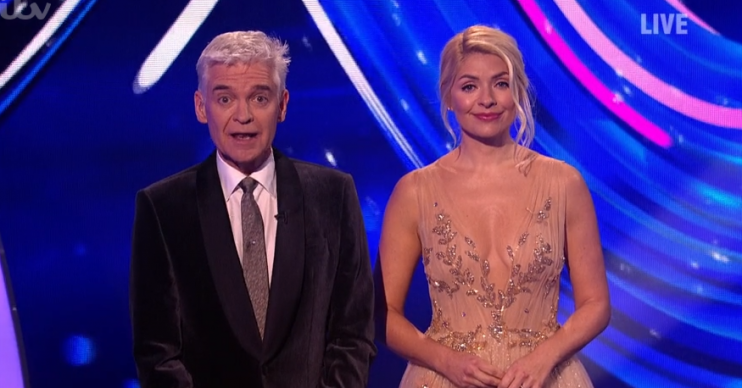 Some said it was too low-cut

TV’s Holly Willoughby usually wows fans with her choice of dresses for Dancing On Ice every weekend.

However, last Sunday, the presenter didn’t win everyone over as she sported a stunning low-cut nude gown featuring flecks of sparkling gold on it.

The dress, made by bridal fashion designer Lili Hod, even wowed audience members as one person wolf-whistled to show their appreciation.

However, according to The Sun, the daring dress sparked complaints to TV watchdog Ofcom.

The publication reports Ofcom received a “series of grievances” from unhappy viewers, who felt it was inappropriate.

Meanwhile, other viewers complained over Ben Hanlin and his professional partner Carlotta Edwards being eliminated.

Ben and Carlotta faced the dreaded skate-off against Paralympian Libby Clegg and her partner Mark Hanretty.

Ben had scored 37.5 for his first routine – which saw him complete the judges challenge of a 45-second solo skate – and 37.0 for his second, a personal skate.

Viewers at home weren’t impressed with the result.

Many slammed judges Jayne Torvill and Christopher Dean for ‘voting with their hearts’ and accused them of ‘favouritism’.

You don’t always have to display everything.

It comes after some people complained over Holly’s dress.

One person wrote on her Instagram: “Cover up a bit more!! You don’t always have to display everything.”

Another said: “Nice pic but looked much more inappropriate on TV for a 6pm family show.”

However, many others loved the dress.

One gushed: “Oh this is out of this world beautiful,” while another wrote: “That dress is stunning!!!”

Last month, Holly was branded an “Ice Queen” after wearing a white sequinned off-the-shoulder gown with a daring leg split.

She revealed on Instagram at the time that her dress is by Narces and her shoes are from Gina.