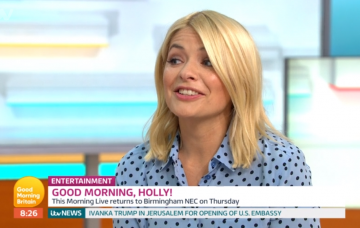 They appeared on This Morning hungover on a few occasions

Holly Willoughby and Phillip Schofield nearly vomiting live on This Morning following a boozy night at the NTAs in 2016 was probably the most unexpected moment in the show’s history.

And during Monday’s edition of Good Morning Britain, Holly was grilled over her drunken antics by Piers Morgan.

The presenter, 37, admitted she “didn’t know how she got away with it.”

Read more: Holly Willoughby says one man is enough for her

Susanna Reid said: “One of your finest moments is an after-party and it’s now become an annual institution hasn’t it, the programme after the National Television Awards… where you turn up still drunk.”

“Well the two most squeaky clean people on television turn up absolutely off their heads,” Piers quipped.

Holly replied: “You only get away with doing that once and we did it once and it will never get repeated again. I don’t know how we got away with it!”

But Piers was quick to ask if she has ever been “encouraged to get wasted again and go on air.”

But Piers said it made “very entertaining television.”

Two years ago, Holly and Phil rocked up to work on This Morning still wearing the clothes from the night before.

The pair had been partying the night away to celebrate This Morning winning a National Television Award.

And they didn’t break tradition this year.

After attending the NTAs after-party in January, Phil admitted he was close to being sick as Holly tucked into a bacon sandwich.

During her chat on GMB, Holly also poked fun at her naughty innuendos on the show.

“Our double entendres aren’t planned,” she explained. “I’m not a funny boned person. It’s impossible to talk about melons and not make a joke.”

What has been your favourite Holly and Phil moment? Leave us a comment on our Facebook page @EntertainmentDailyFix and let us know what you think!