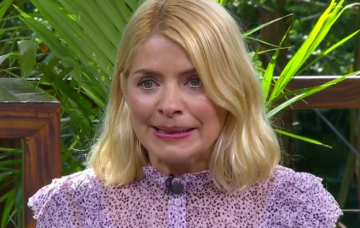 Holly Willoughby inadvertently sparked a furious parenting debate among her Instagram followers after sharing a throwback snap to her time in Australia.

The This Morning presenter went Down Under to fill the shoes of Ant McPartlin on I’m A Celebrity, and as the role involved being on the other side of the world for more than a month, she chose to take her family with her.

Her three children with husband Dan Baldwin – Harry, nine, Belle, seven, and three-year-old Chester – appear to have had an amazing time as she’s shared snaps of them visiting her on set and exploring the famous jungle camp.

But Holly’s latest holiday image, showing them sightseeing in Sydney in front of the Opera House, led some followers to question how her two elder children had been able to have so much time off school.

“I am a little curious as to if celebrities are fined for kids being out of school?” wrote one.

“Lovely photo, but how do you manage to take your kids out of school? If it was any other joe bloggs we could get fined?” said another.

“Shouldn’t the kids be in school???” asked a third.

The curiosity led to a furious backlash from Holly’s fans who rushed to defend the mum-of-three from what they viewed as implied criticism.

“There was me looking at that thinking what a precious family picture how odd you must be that your first though is penalty fines #funspoiler,” wrote one.

“Oh give it a rest on the fines,” said another.

“OMG the poor woman was slated in the media (and on here for accepting the job and ‘leaving her kids’… Now because she took them she’s being slated for taking them out of school,” wrote a third.

Others pointed out that Holly has previously revealed how her children would not be missing out on an education while abroad as they had lessons over there with a tutor.

Holly told The Sun before she left for Australia: “The children will have a tutor out there, they’ve got loads to do. I’ve spoken to their teachers. The kids are like, ‘What do you mean we’re not going on holiday?’”

Many of Holly’s fans said she’d made a good parenting decision to take her children to Australia – even if it meant missing their usual classroom lessons – as she was giving them invaluable life experience by travelling, as well as making happy family memories.

“Holly’s kids are learning about travel another country first which is educational and an insight has to what they want to do or not do when they leave education,” said one.

“Your children will have cool memories, respect,” said another.

“What a wonderful experience for the kids,” agreed a third.

“I believe holidays are the best education!!!” said a fourth.

Although fans couldn’t agree on Holly’s parenting choices, they were unanimous about what a success she had been on I’m A Celebrity.

They said they loved seeing her rapport with Declan Donnelly and urged ITV bosses to have her return again next year.

Do you think it was right for Holly to take her children out of school? Leave us a comment on our Facebook page @EntertainmentDailyFix and let us know what you think!