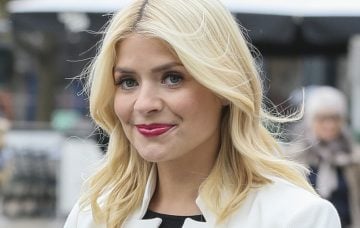 She wants to achieve the best work-life balance

Holly Willoughby has said she’s “strict” with herself when it comes to separating work from home time, to ensure she gets the right work-life balance.

The television presenter told Hello! magazine that as soon as she finishes work for the day, she switches her phone off and her sole focus is on her family.

She explained: “I’m quite strict with myself so when I’m at work, they are my work hours and I get a lot achieved in a small amount of time, like ‘go go go, get it done, get it done’ and then it’s like ‘bang home time – bye everyone!’ and then the phone goes off and everything shuts down and I’m a mum.”

Holly added: “I’m really strict, to the point where I probably drive everyone completely mad, but that’s the way it has to be otherwise you don’t have a work-life balance.”

The star is one of the UK’s most in-demand television presenters.

She hosts This Morning with Phillip Schofield from Monday to Thursday, captains a team on Celebrity Juice, co-hosts the revamped Dancing On Ice, and serves as a brand ambassador for the likes of Diet Coke and Garnier.

Holly’s also just launched her own edit with Marks & Spencer which flew off the shelves in September and will no doubt do the same when the second drop arrives later this month!

She was working on a lifestyle brand, Truly, as well before announcing in September she would be stepping down from the website as she didn’t want her workload to impact on her family.

In a statement at the time, she said: “To launch a brand needs total dedication and at the moment, with so many other commitments, this is not something I feel I can do without it starting to affect my family time at home.”

Perhaps her biggest challenge of the year, however, will be co-hosting I’m A Celebrity… Get Me Out Of Here! on ITV later this month.

She will fly to Australia next week to get started on the flagship ITV programme after being enlisted to join Dec Donnelly and replace Ant McPartlin while he takes time away from work.

Holly will be bringing the whole family with her – including television producer husband Dan Baldwin – and has spoken to her children’s schools to ensure their education isn’t affected by being in Australia.

“When I first found out, it’s obviously bittersweet, but it was exciting. You try and work out when you’ll go and how long for,” she previously said on This Morning.

Holly will be replaced on This Morning by former Saturdays singer Rochelle Humes while she is in Australia.

Are you excited to watch Holly on I’m A Celebrity? Leave us a comment on our Facebook page @EntertainmentDailyFix and let us know what you think!