TV favourite Holly Willoughby wowed in not one but TWO dresses at last night's Dancing On Ice launch.

The This Morning presenter attended the launch for the new series alongside her co-star Phillip Schofield.

Holly, 38, first slipped into a stunning black strapless Peter Langner gown which was embroidered with a silver and glittery pattern.

She shared a snap to Instagram and wrote: "It’s the most wonderful time of the year... @dancingonice time!"

An hour later, Holly changed her outfit and opted for a glamorous light pink gown.

The Iris Serban strapless number featured a sweetheart neckline and she wore a matching pink shawl over her shoulders.

Fans gushed over the looks, with one person commenting: "Wow beautiful Holly."

Another wrote: "Wow absolutely beautiful," while a third added: "Oh wow look at that dress."

During the press launch on Monday evening, Holly became emotional as she discussed her relationship with co-star Phil.

She said: "Phil and I met on this show. There’s a lot of history. You’re going to set me off," as she began getting emotional.

"My kids really love the show as well. I get quite emotional thinking about it, that all of them were carried in my tummy on this show and when we finished I always went off and had the babies.

"So now it’s really nice because they love it and I tend to split it, I bring one of them each week, they come for the whole day and sit through the rehearsals. It’s really nice. It’s a real family show." 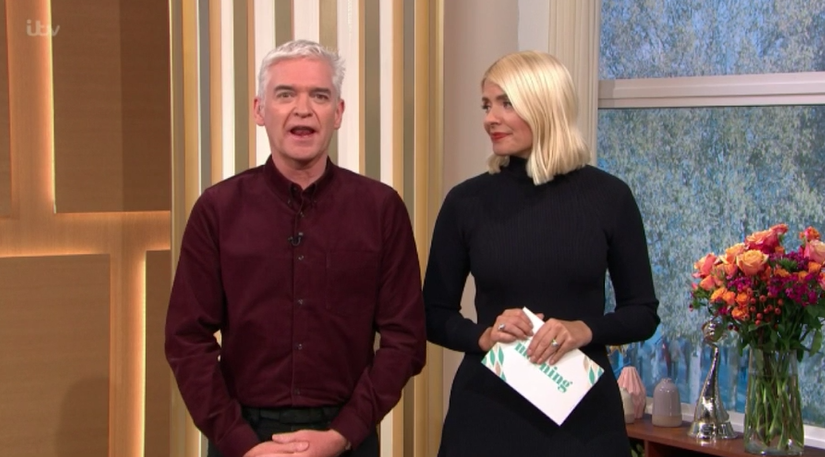 Read more: Holly Willoughby tears up as she discusses relationship with Phillip Schofield after 'feud' claims

In a separate interview with BBC's Newsbeat, the pair hit back at suggestions of a rift after it was claimed that their relationship has become "strained in recent months" - something ITV recently denied.

Holly said: "You couldn’t do the amount of hours of TV that we do with each other without getting on."

Phil added: "We have such a laugh. We’re best mates, she’s like the sister I never had. I just adore working with her, she’s just perfect."