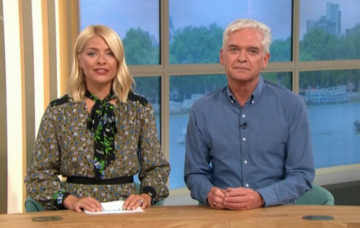 She and Phillip Schofield have returned to This Morning

Holly Willoughby and Phillip Schofield made their long-awaited return to This Morning on Monday.

After six weeks without the beloved duo, viewers were welcomed with a newly-shot title sequence featuring the pair in and around their new London studio surroundings.

As they sat down to catch up with viewers, Phil was quick to bring up the exciting news that Holly will be joining Dec Donnelly to co-host this year’s I’m A Celebrity… Get Me Out Of Here!

After arriving in style in a branded This Morning taxi to Michael Buble’s It’s A Beautiful Day, Phil asked his co-star all about her upcoming stint.

Holly told Phil that she’s spent the summer organising the “logistics” of her move to Australia.

She said: “When I first found out, it’s obviously bittersweet, but it was exciting. You try and work out when you’ll go and how long for.

Holly said her husband Dan and her mum will also be travelling to Australia to be with her.

She continued: “And suddenly, that’s all sorted. And then I go, ‘oh there’s going to be spiders and stuff there.'”

Although she’s excited to be co-hosting the reality show, Holly said there’s three things she’s not looking forward to – the first being the eating Bushtucker trail.

She told Phil: “Even if you were eating chocolate and you opened your mouth to show me what was in there, I wouldn’t like that.”

Phil quipped: “And you’ve got to check [the campmates’] mouths,” to which Holly squealed: “It’s going to be horrible!”

Holly said the second thing she’s not looking forward to in the jungle is the smells of the Bushtucker trails, especially when the stars have had to dig through fish guts!

And the third is when the contestants come out of the trials with creepy crawlies all over them.

Phil said: “I can’t wait. I literally can’t wait. In a country where everything eats you, you’ll be fantastic.”

Holly laughed: “Thank you so much for your support!”

Phillip also revealed Holly had told him about her I’m A Celebrity job earlier in the summer, admitting: “I just couldn’t believe my ears.”

Last week, Holly released a statement saying she couldn’t be more excited to be co-hosting the show with Dec.

Are you looking forward to watching Holly co-host I’m A Celeb with Dec? Let us know what you think by leaving us a comment on our Facebook page @EntertainmentDailyFix!