Fans of Holly Willoughby have accused the presenter of wearing an inappropriate dress for work.

The This Morning host, 38, shared a snap of her latest outfit choice on Instagram, but some of her followers thought it was "too short" and "not appropriate" for her daytime TV role.

The photo, posted on Thursday (07.11.19), shows the star smiling in a £380 burgundy leather mini dress from fashion company Whistles.

Read more: Holly Willoughby 'guilty' of workplace romance as she defends her marriage to Dan Baldwin

A number of Holly's fans loved the dress, with one writing, "Omg love this" and another commenting, "Oh wow, Holly. Love this dress on you, one of my favourite outfits".

Others didn't agree with the look and took to the comments to tell Holly.

Not appropriate for the job.

Another wrote: "Too sexy for work!"

Someone else said: "Lovely dress but not appropriate for the job."

But one user told the presenter not to worry about all the comments regarding the length, writing: "Gorgeous dress, Holly, you look so beautiful. Keep wearing those short dresses and skirts, and keep flaunting those lovely legs of yours." 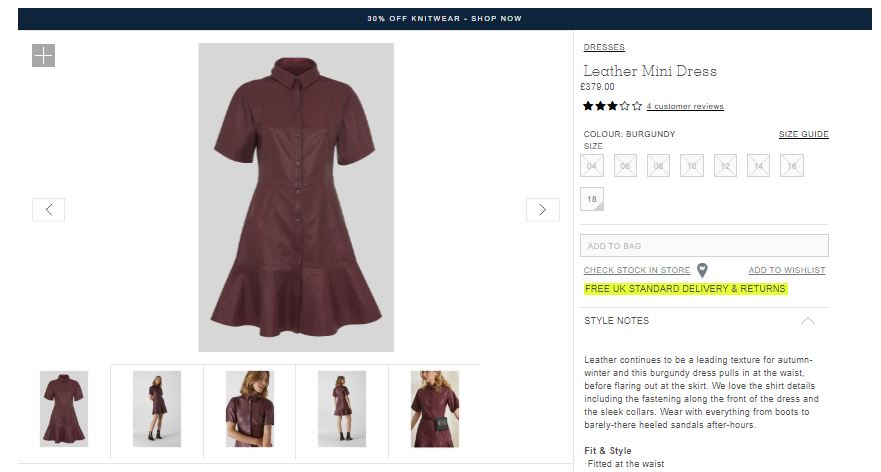 The dress costs £379.99 on the Whistles website (Credit: Whistles)

It's not the first time this week that viewers have taken issue with an outfit worn on This Morning.

The Celebrity Juice star, 43, wore a grey blazer and trousers with a black and white bandana, round glasses and trinkets around his neck.

Phil said: "Look at you! What's the bandana and the glasses..." Read more: Trainee doctor paralysed as suicidal man landed on her as he jumped

Gino explained: "I'm growing my hair. Instead of putting loads of wax [in it], I'm going to wear a bandana."

Holly then told him: "You've got the beads and everything. You look like someone who's been travelling on a gap year and you've come back with all the stuff."

Gino clarified: "That's what has happened. I've been travelling, I went to America filming and then I thought, 'You know what? From now on, I want to start breeding horses'. I'm going to be a proper cowboy."

On Twitter, viewers wondered if he was going through a midlife crisis.