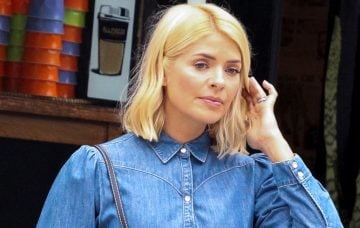 This Morning, I'm A Celeb, Dancing On Ice - and now this

There’s no denying 2018 has been Holly Willoughby’s YEAR. And the popular presenter has just capped it off by winning the title of Beauty Icon of the Year.

And it wasn’t even a close-run competition, with the I’m A Celebrity… Get Me Out of Here! star taking home more than double the votes of her nearest rival, and a quarter of the total votes.

This Morning veteran, Holly, had 25% of the votes, while the 73-year-old The Queen star received 12%.

The royal family featured prominently on the list, too, with Kate Middleton coming in third – beating singing royalty Adele who came in fourth with 9% – as well as the Queen and Meghan Markle.

In fact, the new Duchess of Sussex received only 4% of the vote, coming in eighth, under her grandma-in-law, who was joint seventh.

The other three names on the list include former Coronation Street actress, Michelle Keegan who was fifth, singer Rihanna at ninth, and Strictly Come Dancing 2018 star Katie Piper who came in 10th.

Superdrug commercial director, Simon Comins said in a statement via MailOnline: “Holly really is the celeb of the moment following what’s been an incredible year for her. She’s become a beauty star renowned for her effortless, natural look which our customers can clearly relate to.”

Let’s raise a glass to this one… @rochellehumes … you are and continue to be amazing! ❤️ #girlsnight #christmas x

He added: “This year we’ve seen concealers outperform beauty staple foundations for the first time, indicating our customers are choosing a more understated look in comparison to the heavily contoured styles sported by the biggest reality stars on social media.”

Mum-of-three Holly has had an epic year, taking a sabbatical from her usual spot next to Phil Schofield on the This Morning sofa, in order to present the popular ITV jungle show.

Since returning from Australia, Holly has swapped her combat boots for ballgowns, as she prepares to present Dancing On Ice, starting January 6.

The Dancing On Ice Instagram account shared a video of Holly dancing with Phil, 56, along with judges Jayne Torvill, Christopher Dean, Jason Gardiner and Ashley Banjo.

They captioned it: “It wouldn’t be #DancingOnIce without this lovely lot… 🤩.”

ITV also shared a picture of their four judges all together.

Beside it, they captioned the photo: “Our four faves 💙 Who else can’t wait to see our judges back at work?”

Do you agree with this vote? Leave us a comment on our Facebook page @EntertainmentDailyFix and let us know what you think.