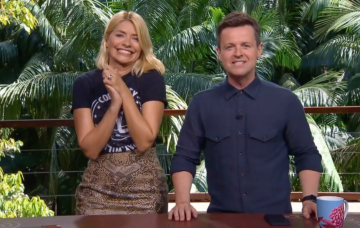 Bosses ‘want Holly Willoughby to host I’m A Celeb with Ant and Dec next year’!

Holly Willoughby has been such a hit on this year’s I’m A Celebrity… Get Me Out Of Here! that show bosses apparently want her back to host with Ant McPartlin and Dec Donnelly!

The 37-year-old stood in for Ant this year, while he takes time out from TV work following his drink-driving arrest. But now it has been reported that Ant is expected to return next year – and he may not be alone.

Mirror TV critic Ian Hyland told ED!: “TV bosses are convinced three will definitely not be a crowd in this trio’s case. They think they could recreate some of the old magic the boys shared with Cat Deeley back in their SM:TV days.”

Fans have given Holly high praise for her stint alongside Dec this series, branding her a “natural” and telling her she’s done an “amazing” job.

A source told The Daily Star: “The original plan was for Holly to stand in while Ant was off and then hand the baton back. But she’s been such a success that producers are now keen to keep her whatever happens.”

The source added: “Many presenters would have crumbled under the pressure of joining such a big show, but Holly stepped up to the plate. The top people at ITV are now really keen to get her back next year.”

The mum-of-three has branded her time on the show “magical” and said there is nowhere else like it.

She shared an adorable picture with her children, Harry, nine, Belle, seven, and four-year-old Chester as she said goodbye to the jungle today.

Yaaaaas! So wonderful to be able to crown the man that melted our hearts for the last 3 weeks! Congratulations King Harry… @imacelebrity it’s been the most wonderful adventure… it’s been a dream… thank you for having me… Jam roly poly’s all round!!!! 🥰 🥰🥰🥰🥰🥰🥰🥰 🥰🥰🥰🥰🥰🥰🥰🥰 Dress @zadigetvoltaire ❤️

However, Holly said during an interview with This Morning today that her time in the jungle was a “one-off piece of heaven”.

A spokesperson for I’m A Celebrity told ED! they are not aware of conversations about Holly’s return next year.

Do you think Holly could present with Ant and Dec? Leave us a comment on our Facebook page @EntertainmentDailyFix and let us know what you think.