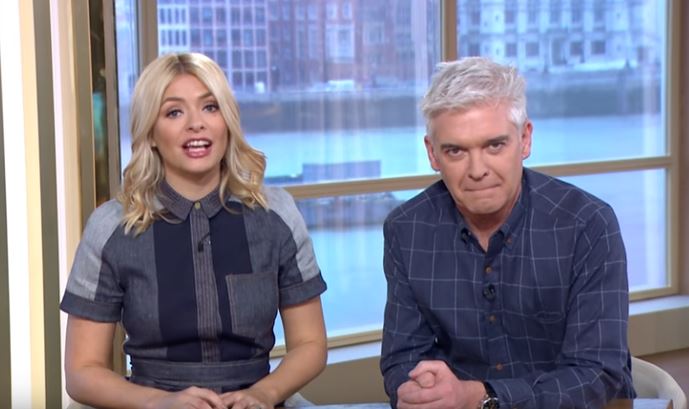 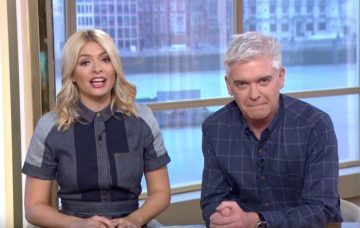 Will Phillip Schofield get a temporary co-host on This Morning?

This Morning has said plans for Holly Willoughby’s absence while she co-hosts I’m A Celebrity… Get Me Out Of Here! will be announced “in due course”, suggesting Phillip Schofield could get a temporary new co-host.

Holly, 37, will be jetting to Australia later this year to co-host the ITV primetime show alongside Declan Donnelly, 42, while his usual telly partner Ant McPartlin, 42, continues to take a break from TV work.

The show usually films across several weeks in November and December.

That coincides with when Holly would usually be filming This Morning with Phillip, 56, back in London.

So, the big question is, who will replace Holly as she replaces Ant?!

Or will Phil just host This Morning solo?!

Today’s This Morning co-hosts Eamonn Holmes and Ruth Langsford also said everyone at This Morning wished Holly well in her new role.

Eamonn and Ruth have been covering for Holly and Phil over the summer holidays.

Speaking on Wednesday’s show, Ruth said: “I can exclusively reveal that our very own Holly Willoughby will be heading Down Under. She is going to be co-hosting I’m A Celebrity alongside her good friend Dec.

“We are all very excited for Holly, really pleased for her, and everyone here at This Morning wishes Ant all the best [with his] continued recovery.”

There are plenty of names already being floated around as replacements for Holly while she’s away.

Among them are Saturdays singer and Strictly star Mollie King, who has been guest hosting over the summer, or Rochelle Humes, currently covering on Lorraine.

Other guest hosts over the summer have included Mark Wright, Matt Edmondson and Gok Wan.

Meanwhile, one Twitter user suggested another solution: moving the whole This Morning production to Australia while I’m A Celeb is on! 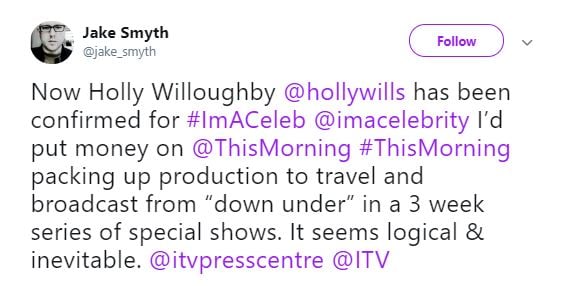 Holly and Phil are due to return from their summer holidays in September and no doubt we’ll get loads more info on Holly’s plans for Down Under!

She said today: “I couldn’t be more excited to have been asked to stand alongside Dec for the next jungle adventure. I love Ant and want to send him my best wishes and support for a continued recovery. These are big shoes, not to fill, but just to keep warm for a little bit.

Dec added: “I am hugely grateful to Holly for agreeing to accompany me to Australia this year. She was at the top of my list and I’m thrilled she said yes. It will be a different kind of series but we will try our best to ensure it is no less fun and eventful for our loyal viewers.”

Ant is taking a break from TV commitments until 2019 as he continues to focus on his well-being after a drink-drive incident in March.