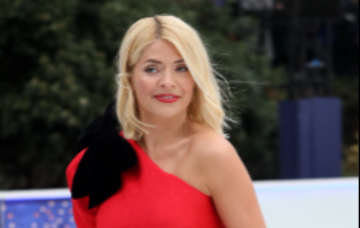 The This Morning presenter is looking forward to 2019

Holly Willoughby saw in the New Year in style with her three children and husband by her side.

The This Morning presenter shared an image with her Instagram followers of the family standing on a shore watching a 2019 sign lit up in flames over the sea as they celebrated on New Year’s Eve.

Wearing an LBD, Holly can be seen raising a glass in one hand while she holds the hand of her youngest son in the other.

The picture with her husband Dan Baldwin shows them all from the back, as Holly doesn’t want their three children, Harry, nine, Belle, seven, and Chester, four, to be in the public eye.

Beside the sweet snap the mum-of-three wrote the message: “2019… as long as you four are beside me … we’ll be just fine…”

2018 was quite a year for the presenter. She launched her own clothing range with M&S and stood in for Ant McPartlin on I’m A Celebrity.

Many viewers loved her rapport with Declan Donnelly and urged ITV to sign her up for the next series.

Holly admitted she loved her time on the show, which doubled as a family holiday as she took her three children with her to Australia. She shared images of them on Instagram exploring the jungle set and seeing the sights Down Under.

However, she said she won’t be returning as it was “once in a lifetime adventure.”

The 37-year-old had also been due to launch her own lifestyle brand, Truly, but announced in the Autumn that she had to step away from the project as she was too busy and didn’t want work to affect her family life.

Explaining the decision to Stella magazine, she said: “You cannot have it all. I’ve had the most incredible opportunities this year but it’s also overwhelming. It came to a point where I knew something had to give.

“Truly was something I was very passionate about, but my husband has a really high-pressured, busy job and I have three kids and other projects. My son Harry has really got into football and I want to be able to take him there so he can do what he loves.”

She added: “I didn’t want to be in a position where I was working in the evenings and couldn’t be with them. It’s not just about me having my dream and everyone fitting round it, it’s about putting family first and making that choice.”

Holly intends to keep her work-family life balance going in 2019 by returning to her role on This Morning on Monday to Thursdays. She took a break from the show at the end of the year to co-host I’m A Celeb, with Rochelle Humes holding the fort alongside Phillip Schofield.

From next weekend, Holly and Phil will also be teaming up on Sunday nights to present the new series of Dancing On Ice.

Holly has also said she will continue to appear on Celebrity Juice, despite her best pal Fearne Cotton leaving the show.

So while Holly is still making plenty of time for her family in 2019, we’ll also continue to see lots of her on our screens, hurrah!

Are you a fan of Holly Willoughby? Leave us a comment on our Facebook page @EntertainmentDailyFix and let us know what you think!