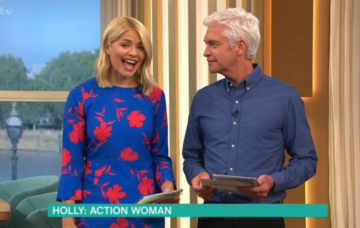 She did something she's never done before

To celebrate the hottest early May Bank Holiday weekend on record, Holly Willoughby decided to take a surfing lesson.

During Tuesday’s This Morning, Holly told her presenting partner Phillip Schofield that she visited Cornwall for her pal’s hen do at the beginning of the weekend.

Holly, 37, revealed that during the visit she did something she’s never done before: she went surfing!

“I went to the beach,” she told Phil. “I had a bit of a split Bank Holiday because my friend is getting married this summer, so the beginning of the Bank Holiday we went down to Cornwall for a hen day.”

“And on that day, I did something I’ve never done before,” she continued. “We all went surfing, we had a surf lesson and I actually managed to get up on my board!

“For a 37-year-old woman, I felt quite pleased with myself. Check me out!”

“Look at you,” Phil said, as a snap of Holly surfing popped up on screen.

“The surf cannot be described as gnarly,” Phil quipped. “You are hanging 10 [a surfing maneuver].”

“Well, I was hanging,” Holly joked.

Phil, 56, then revealed his dad built the first surfboards in Cornwall.

“He would have been very proud of that,” he said to Holly.

Holly revealed her surfing skills didn’t last too long, though, because she and her pals had enjoyed a night out the previous night, so they ended up “collapsing” on the surf boards.

“Did you see what Mr Schofield got up to this weekend?” Holly asked viewers.

A snap then popped up showing Phil completely naked while enjoying a spot of gardening.

With a sunflower emoji covering his bottom, the photo saw Phil giving a cheeky grin while holding a pair of garden shears.

“I actually did a huge double-take when I saw this,” Holly admitted.

“I went for it,” Phil said. “It was World Naked Gardening day.”

He then joked: “It was also apparently World Midwife Day, and I thought I can’t do a picture of that one!”

How did you spend the bank holiday weekend? Leave us a comment on our Facebook page @EntertainmentDailyFix and let us know what you think!