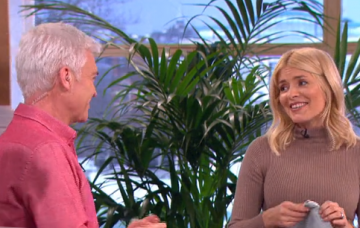 Holly Willoughby stunned by “best birthday” surprise ever on This Morning

Holly Willoughby was left speechless at the end of today’s This Morning when she received an early birthday surprise.

The show’s co-host will celebrate her 37th birthday on Saturday but, as she and Phillip Schofield don’t work Fridays on This Morning, the crew decided to mark the big day early.

As Holly and Phil wrapped up Thursday’s steak masterclass segment at the end of the show, Phil gestured to someone off camera.

He then told viewers: “This is where, obviously, we would normally wrap up the show. Someone has a birthday this weekend so we’re a bit early.”

A stunned Holly then squealed as a tasty looking rainbow cake was brought on set, alongside a bunch of balloons carried by the day’s guest, Kem Cetinay.

“Thank you so much!” she said.

“That cake is the most incredible cake. It looks like it’s been made by unicorns!”

And we all know how much Hols loves unicorns, right?!

After cutting into the cake, Holly discovered another surprise: “Oh my gosh, it’s full of sweets! That’s the most amazing cake I’ve ever had!

“And champagne! This is the best day ever!”

Holly ended the show by toasting her birthday with a glass of bubbles.

“This is the best birthday ever!” shouted Holly.

Taking a big bite of cake Holly then said goodbye to viewers… until Phil reminded her the show hadn’t finished just yet!

Oops! Holly had forgotten to do the link to tomorrow’s show.

Phil then joked that given Holly’s birthday is on Saturday, she’ll no doubt be celebrating on Saturday night, meaning she’ll be “rubbish” on Sunday’s live Dancing On Ice.

She replied: “I’m going to be really rubbish on Sunday! No I won’t, I’ll be fine! I’ll just carry on!”

How did you celebrate your last birthday? Leave us a comment on our Facebook page @EntertainmentDailyFix and let us know what you think!