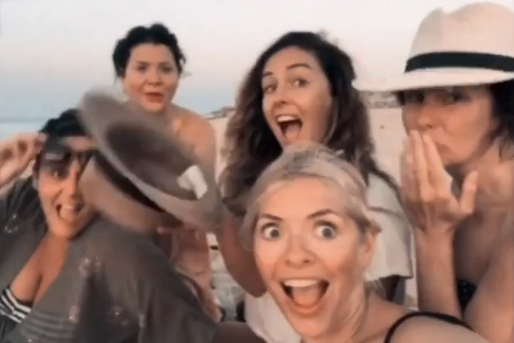 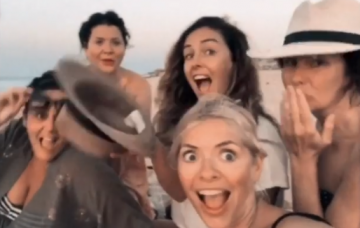 The post showed the TV presenter standing behind a bar enthusiastically shaking a cocktail shaker.

Holly has been sharing a few holiday shots over the past few days, showing she’s making the most of her time off work.

Yesterday she shared a blissful shot of herself and her sister soaking up some sun on the beach.

The image showed the two sisters against the background of an empty beach, and was captured simply “Sisters… @ladywilloughby 👯‍♀️”

Earlier she had posted a shot of her sister and their friends on the beach, captioned “Glam squad 🙌🏻 ”

Holly may be spending more time on the beach this year – she is reportedly set to step in to co-host I’m A Celebrity in Australia alongside Dec Donnelly.

After Dec’s longtime presenting partner Ant McPartlin announced he would be taking a break from work while he dealt with his addiction issues, rumours began to circulate about who would replace him.

The Mirror has claimed that the This Morning presenter agreed to take the job after being sure that she had Ant’s blessing – and that her children could come with her.

“Ant is pleased that it will be a friend like Holly stepping into his shoes even though he knows that not being there himself will be hard,” their source said. “Having Ant’s blessing meant an awful lot to Holly.”

The source claimed that being able to take her children with her was crucial to her accepting the role.

“Being on the other side of the world to her children was a sticking point,” the source said. “Once she’d ensured that they could join her on the adventure, she was thrilled.”

The new series of I’m a Celeb is set to start filming later this year.

What cocktail do you think Holly was making? Let us know what you think of this story by leaving us a comment on our Facebook page @EntertainmentDailyFix!