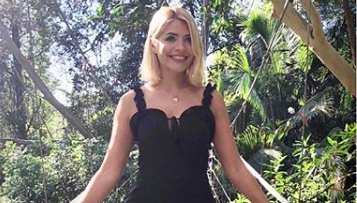 She is saying her goodbyes

Holly Willoughby has marked the end of her I’m A Celebrity… Get Me Out Of Here! journey with an adorable photo in camp with her kids.

The presenter was pictured on one of the camp logs by the fire with her three children, Harry, nine, Belle, seven, and four-year-old Chester.

Fans rushed to praise her for doing a great job on the show for the last three weeks, alongside Declan Donnelly.

One gushed: “Congratulations Holly, you did a fantastic job”.

Another added: “You’ve been amazing Holly”.

Others added that they would like to see her back next year.

One commented: “I love you presenting this year alongside Dec- it gave it a fresh feel. Please go back next year.”

A second wrote: “well done holly you did good it will be nice to have you back”.

During last night’s final, which saw Harry Redknapp take the crown, Dec, 43, thanked Holly for standing in for his usual co-host Ant McPartlin.

On their final Extra Camp appearance, Holly told Dec: “There is nothing like this place.

While some are urging Holly to come back next series, it has been reported that Ant, 43, will make a return.

He is expected to make his TV comeback with Dec on Britain’s Got Talent in January.