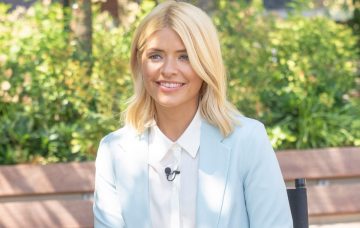 Holly Willoughby shared a picture of her and her sister on a sun-soaked getaway, and fans are shocked by their different looks.

Captioning the snap: “Sisters…@ladywilloughby”, Holly, 37, and her sister Kelly, 40, can be seen enjoying a beach stroll during a much-deserved break away.

Fans were delighted by the rare snap, but seemed to be at a loss as to how the sisters could look so different, but so similar at the same time!

The two siblings, who are three years apart in age, both share the same pale eyes and wide smiles, but while Holly is famous for her blonde tresses, Kelly’s dark and curly brunette hair marks a unique difference between them.

“You look so similar, but yet so different! Beautiful ladies,” wrote one fan.

Kelly is also in the limelight as a children’s book author, and her an Holly have previously collaborated on novel ‘School for Stars’.

Showing their closeness, Holly also shared a gushing post about her big sister for her birthday in May, alongside a collage of throwback pictures.

The This Morning host wrote: “Nothing but pure love for this one, today and always…my sister…I love you…beyond! @ladywilloughby happy 40th birthday.”

The pair have also been close, but in a previous interview with the Guardian, Kelly admitted that she and Holly are as different as chalk and cheese!

“I’m organised and regimented, Holly is messy – like chalk and cheese, we excelled at different things at school,” she said.

However Holly admitted that her older sister had let her hang out in the same friendship group – a cardinal sin for some siblings!

She added: We’re more like friends than sisters. We even bought a place together in Putney. You would expect fireworks, but because we have the same friends, and have different roles within that group, none of that ever came into it.

“I’m more likely to be the one to say, ‘everyone back to mine, and cook for everyone’, whereas she’s much better at tidying up!”

Kelly returned the sentiment, referring to her little sister as ‘naughty’ in a post for her birthday in February.

“Happy birthday @hollywilloughby…my best friend when I’m in trouble, my big sis when I’m sad and my little sis when it’s time to be naughty!”

Are you as close to your sister as Holly and Kelly? Do you think they look alike? Leave us a comment on our Facebook page @EntertainmentDailyFix and let us know what you think!