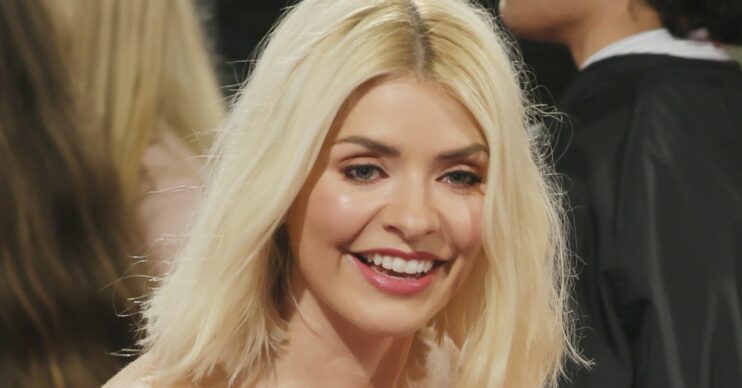 It helps when anxiety 'creeps in'

Holly Willoughby has revealed the secret methods she uses to overcome “anxiety”.

Shortly after hosting This Morning today (November 8), Holly took to social media to share how she “creates calmness” in certain situations.

Holly Willoughby opens up on anxiety

The star was seen wearing the Diamond & Spinning Moonstone Necklace from the collection.

The necklace – priced at £325 – features diamonds in the shape of a crescent moon with a spinning globe of rainbow moonstone.

If any feelings of anxiety creep in

“I wanted the Moonstone in this necklace to spin on its axis, so if any feelings of anxiety creep in I have something to play with… she’s a really beautiful piece for many reasons.”

Fans rushed to comment on the post, with one saying: “You are gorgeous. Also thank you so much for educating us on this as it’s definitely something I want to learn more about.”

A second shared: “As a person with anxiety…THANK YOU ! Going to order mine asap.”

It isn’t the first time Holly has opened up on her emotions.

During a recent appearance on Lorraine, the star revealed that a “lot of tears” went into writing her new book Reflections.

She told Lorraine Kelly: “There’s been a lot of tears. It’s been very hard, it’s been painful.

I think sometimes shining a light into those dark corners of your own life is hard and sometimes you have to be very brave, and you have to dig really deep to do it.”

Meanwhile, the mum-of-three even admitted to getting angry with husband Dan Baldwin in the book.

Holly penned: “If I’m watching something on TV and my husband suddenly asks, ‘Why are you watching this [bleep]?’, it’ll spark something deep inside and I will get disproportionately angry about it.

Read more: Holly Willoughby distracts Pride Of Britain viewers with appearance as she hands out award

“But actually I’m angry because I subconsciously feel as though someone’s trying to control what I’m doing.

“My husband absolutely isn’t trying to control me, but I’m getting a really strong reaction, so maybe I’m worried about control in my life. Maybe that’s a sign that I still need to address the issue of control.”