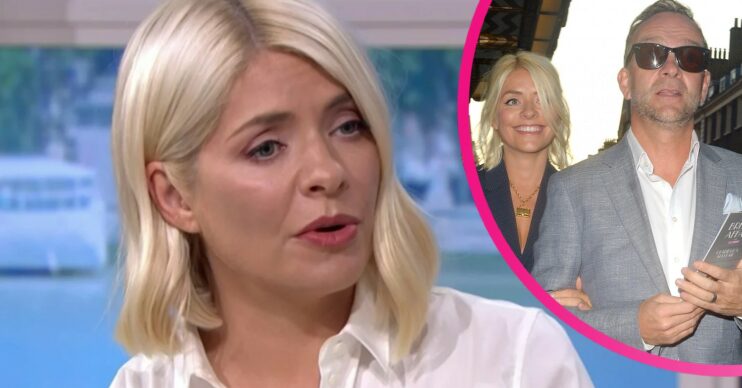 The presenter admitted that she 'loves' being angry

Holly Willoughby has revealed that her husband, Dan Baldwin, urged her to stop meditating after turning into an “angry woman”.

The 40-year-old This Morning presenter is busier than ever as she promotes the her new perceptive book, Reflections.

On the radio show, the mum-of-three opened up on her love for meditation.

After embarking on the spiritual process, Holly began to feel strong emotions of anger.

She explained: “I love anger… I never used to. Once I started to look into it I thought I’m not sure this is going to work because I began to feel angry.

I began to feel angry

“My husband was like, ‘You need to back away from the meditation because you’re one angry woman!’

She continued: “It was a really powerful way to find out what was behind my feelings. Anger can pull you forward.”

During the chat, Holly also admitted that she “lost herself” after becoming a mum to her three children – Harry, Belle and Chester.

The TV star went on: “I’m very blessed. I have a wonderful husband, children and career, but I felt something was missing somehow. The more I sat still the thing that was missing was me.

“I needed to pull bits of it back because I lost myself quite a bit.”

Meanwhile, it follows shortly after Holly disappointed fans with her new jewellery range.

The ITV star announced the collection – Moon Worshipping with Kirstie Le Marque, Love You to the Moon & Back – earlier this week.

However, some fans took issue with the price of the more expensive items.

Following the release, one wrote: “Everything you’ve created is beautiful. It’s just such a shame it’s so expensive.

“I understand the jewellery will be expensive (it looks gorgeous) but the candles are so expensive. It’s such a shame you couldn’t reach out to us on the average wage.”

Read more: Holly Willoughby vows to help women who aren’t as ‘lucky’ as she is as she promotes book

A second complained: “These are gorgeous but will be out of my price league.”

Another added: “Beautiful jewellery but way out of price range like your candles.”