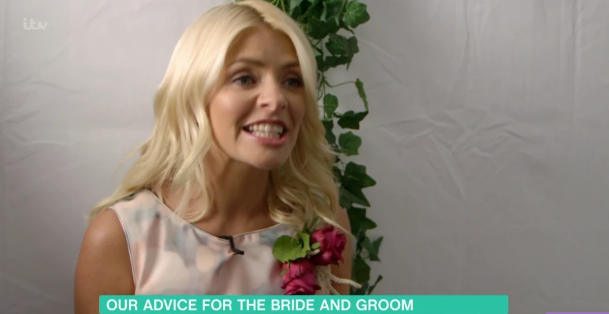 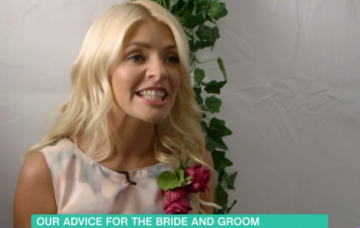 Holly Willoughby reveals mistake she made on her wedding day

Holly Willoughby has revealed she was left walking around barefoot on her wedding day because she wore uncomfortable shoes.

The star, 37, made the confession while giving advice to Sarah Roustoby, who married her fiancé Shane Maddison live on Thursday’s This Morning at the Royal Albert Hall.

Holly warned bride Sarah about wearing uncomfortable shoes and also spoke about how walking around barefoot left the hem of her dress covered in dirt.

The presenter, who married TV producer Dan Baldwin in 2007, said: “Pace yourself, enjoy it… remember all those small moments… it goes so fast. I know it’s a cliché but it’s one of the best days of your life.”

Giving advice to Sarah specifically, Holly added: “Make sure you have comfortable shoes! I know you want the Cinderella, glitzy, sparkly high heels but I fell into that trap and I ended up walking around barefoot all day, which was lovely, but if you look at the hem of my wedding dress now, it is covered in dirt!”

Meanwhile, Holly burst into tears as she watched the emotional ceremony.

Sarah and Shane said “I do” in front of their family and friends as well as Holly, Phillip Schofield and other members of the This Morning team.

But Holly was left wiping away tears as the stunning bride walked down the steps of the auditorium.

As Sarah walked towards her soon-to-be husband, The Kingdom Choir – who played at Prince Harry and Meghan’s wedding in May – performed John Legend’s All of Me.

Claire Bradford, the celebrant, then led the couple through their vows as Shane told his bride: “As we join our lives together, let us vow to live in truth… To ride lives waves and conquer all that is in store for us.”

Sarah replied: “My soulmate, my friend, my love…you are the one I want to share all my adventures with.

“I promise to always be there for you. I promise to show you unending love, because love is all we need.”

The loved-up pair then sealed the vows with their wedding rings as they officially became husband and wife.

Shane’s ring contains fragments of dinosaur bone and meteorites and Sarah’s is made from platinum.

Following the ceremony, Holly, Phil, Sarah and former Marine Shane spoke about the moment they became husband and wife.

Speaking about the moment the choir started singing, Holly said: “It totally floored me. It was beautiful.”

When asked what his reaction had been when he first saw his bride, Shane said: “I broke down. My reaction said it all. Beautiful,” to which Sarah added: “[It’s] Amazing.  It is beautiful.”

Prior to the nuptials, the whole This Morning family, including Alison Hammond, Phil Vickery, Steve Wilson, Lisa Snowdon, Alice Beer, The Speakmans, Sharon Marshall and make up expert Bryony Blake were there to make the day extra special.

Read more: Holly Willoughby reveals how she juggles This Morning and being a mum

Did you make any mistakes on your wedding day? Leave us a comment on our Facebook page @EntertainmentDailyFix and let us know what you think!