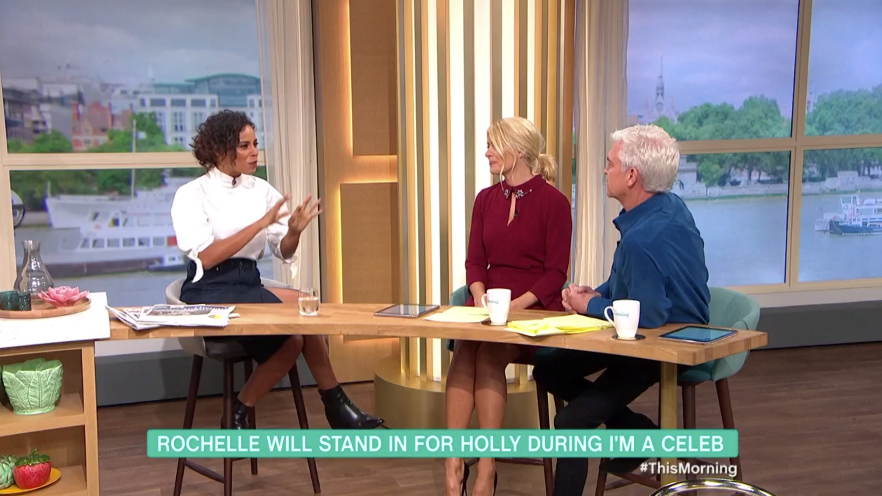 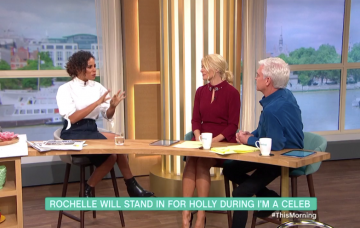 She couldn't be more excited!

Rochelle Humes has been confirmed as Holly Willoughby’s replacement on This Morning while she’s hosting I’m A Celebrity.

Holly, 37, is taking a break from This Morning to join Dec Donnelly as co-hosts of I’m A Celebrity in Australia later this year.

And her seat will be kept warm by former Saturdays singer Rochelle, 29, who will join Phillip Schofield, 56, on the famous sofa!

The announcement was made on Tuesday’s This Morning, with Rochelle’s photo being put up on the This Morning Hall of Fame next to Holly and Phil’s pictures.

She then joined Holly and Phil on the show.

Rochelle promised Holly she will “take good care” of Phillip and said she was honoured to be stepping into Holly’s shoes.

She’s previously served as a guest presenter when Holly and Phil have been away, but this will be her first time hosting with Phillip and for such a long period of time.

“I’m excited. I can tell people now!” laughed Rochelle. “There were rumours at the weekend and I didn’t reply to any of my friends, so sorry! I’m doing it.”

She added: “I’ve done the show before but never with the legend [Phillip]!”

Phillip told her: “I’m really looking forward to it. It will be fabulous, we will have a great time.”

Rochelle told Holly she’ll be on her best behaviour so Holly has a job to come back to!

Holly has been drafted in to replace Ant McPartlin on this year’s I’m A Celebrity after he took a break from all work commitments following a drink-drive incident in March.

Are you happy Rochelle is replacing Holly? Leave us a comment on our Facebook page @EntertainmentDailyFix and let us know what you think!