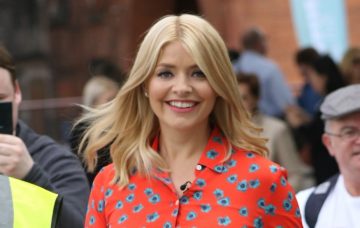 It's not often you see glimpses of Holly's children!

Holly Willoughby has treated fans to a rare photograph of her daughter Belle.

The 37-year-old telly favourite uploaded a picture of Belle to Instagram to mark the little girl’s seventh birthday – and it’s clear she’s a chip off the old block!

Well, from what we can see of her, anyway!

Holly and husband Dan Baldwin keep their three children away from the spotlight and have never shown their faces on social media.

And staying true to form, Holly’s birthday photo of Belle was taken from behind.

In the snap, the little girl is seen lying on her stomach while playing with an assortment of brightly-coloured toys – including a unicorn, widely known to be one of Holly’s favourite things!

Belle is also wearing a rainbow-patterned white jumper, very similar to the rainbow tracksuit her famous mum wore during Dancing On Ice rehearsals earlier in the year.

Holly wrote the caption: “Happy birthday to this beautiful girl who fell straight from the rainbow onto a unicorn’s back and has ridden it through a world of dreams for the last 7 years… don’t know where she gets it from?! …

A slew of Holly’s famous pals were quick to like the picture and send their own birthday messages, including This Morning co-star Phillip Schofield and Davina McCall.

The star has been enjoying her Easter holidays with the family over the past two weeks, meaning she and Phillip have been absent from This Morning.

Instead, viewers have been treated to replacement co-hosts Emma Willis and Rylan Clark-Neal, and Ruth Langsford and Eamonn Holmes.

Holly and Phil will return to This Morning on Monday.

They’ll be hosting from a different studio, however, as the old ITV building on London’s South Bank is being renovated, meaning popular daytime shows including This Morning and Loose Women will be temporarily broadcast from the old BBC building in White City, West London.

Looking forward to Holly and Phil being back on This Morning? Leave us a comment on our Facebook page @EntertainmentDailyFix and let us know what you think!